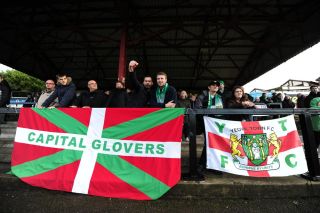 Yeovil maintained their National League promotion push on Saturday, but victory at Chorley did little to lift the dark cloud hanging over the club.

The Glovers’ proud reputation as a welcoming, family-orientated club was dealt a huge blow last week after their FA Cup tie at Haringey was abandoned amid allegations of racist abuse.

Haringey manager Tom Loizou took his players off the field after claims his goalkeeper Douglas Pajetat had been targeted by Yeovil fans.

The Football Association’s investigation will continue next week, while two Yeovil fans were arrested on suspicion of racially aggravated common assault and bailed without charge on Wednesday.

It was the first time an English football match at such a senior level had been abandoned in such circumstances and Yeovil’s fans at Chorley’s Victory Park shared a sense of shame.

“We weren’t at last week’s game and we were happy at not being there,” Richard Denney, 47, told the PA news agency.

“I was ashamed. I felt sad. I was out with my girlfriend on Saturday night and I couldn’t enjoy myself. I was hurt by what had happened to the club I love.”

Richard had travelled to Chorley with his nine-year-old son George, who had defiantly unfurled a banner he had made, which read: “Say no to racism”.

“I’ve never seen anything like that at the club in all my years,” Richard added. “I know the investigation is still ongoing, but there’s no smoke without fire.

“Something really unpleasant happened last weekend and I hope it never happens again.

“It takes years to build a reputation and a minute to destroy it and certainly what went on has gone a long way to doing that.”

An estimated 200 Yeovil supporters made the eight-hour 450-mile round trip from Somerset to Chorley.

Save for some hearty singing by a hardcore of about a dozen, complete with a drum, the Glovers’ 2-1 win at Chorley passed without incident.

Chorley’s Ntumba Massanka cancelled out Matt Worthington’s early opener before Rhys Murphy’s late header lifted Darren Sarll’s side up to second place in the table, one point behind leaders Bromley.

Yeovil are bidding to bounce straight back to the Football League after their 16-year stay ended last season when they finished bottom of Sky Bet League Two.

But promotion talk was not at the top of fans’ agenda at Victory Park.

Paul Mayston, 61, and daughter Colette, 29, agreed Yeovil’s reputation had been damaged, but insisted the club would heal with time.

“I could not believe what unfolded at Haringey. Still can’t,” said Paul. “This club is the opposite of those clubs you usually associate with trouble.

“We’re just not like that. I’ve been going since I was a boy. Everybody knows most people and us older ones keep the more boisterous ones in check.

“We’ll tell them to calm it down, but that doesn’t happen often. We’re hurting now, but we’ll show everyone what this club is all about in time.”

Colette added: “The club and fans and the community are so close-knit. They’ll stick together and show the true face of Yeovil.”

Some Yeovil supporters, who refused to go on record, were not convinced the incident at Haringey was racially-motivated and feel the inquiry will fail to prove it was.

“Definitely,” he said. “Most people think of Yeovil as a quiet little town. People don’t associate it with trouble at all.

All the action & stats from today's game with @YTFC from @aa_birch..— Chorley Football Club (@chorleyfc) October 26, 2019

“To think someone could have made racist comments and ruined our reputation as a nice family club could really damage us, but we’ll stick together.”

Ewan Berkley, 20, was critical of the media’s coverage of events at Haringey.

He said: “I think it’s wrong how the media have portrayed Yeovil because at the end of the day it’s only allegations (of racism).

“From what I’ve been told and seen there’s very little evidence to suggest there was racism involved.

“To think people could accuse us of that is wrong and the way we even ended up being talked about like that in the House of Commons is wrong.

“Go on social media. People from Yeovil have been sent death threats if they go to Haringey.”

The Glovers’ FA Cup fourth qualifying round tie with Haringey will be replayed on October 29.