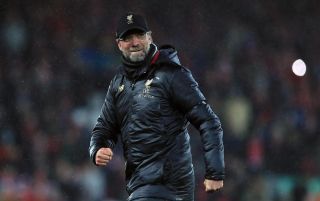 Jurgen Klopp insists Liverpool must stay focused on their final fixtures of the season and ignore the possibility of Manchester City slipping up at the conclusion of an exhilarating Premier League title race.

The Reds moved back to the top of the table with a comprehensive 5-0 victory over relegated Huddersfield, with Sadio Mane and Mohamed Salah each bagging a brace following Naby Keita’s opener after only 15 seconds.

City will return to the summit if they overcome Burnley on Sunday, but Klopp stressed he is not counting on Pep Guardiola’s side suffering a surprise setback.

Instead, the Liverpool manager feels his side need only to concentrate on next Saturday’s trip to Newcastle in their penultimate league fixture and then the visit of Wolves the following weekend.

He said: “Why should we think where City could slip or not? We play Newcastle in the league, Newcastle – that’s their last home game.

“I’m not sure if there is a traditionally outstanding relationship between the cities or something like that or an exchange of points when you need it.

“It’s not like it is, we will go there and they will fight, they fight with all they have in their last home game and we have to be ready. We don’t have to think about anything else.

“And then last game (against Wolves) – wow. Maybe it’s like this, if they win then they are for sure seventh in the league, if they want to go for that then you will see that as well. It’s a really difficult team to play against.

“If we do the job in these two games and something happens in the other games then we are there, if not then we still did our best, our 100 per cent best and that’s the only thing we can really expect from us.

In ruthlessly dispatching Huddersfield, Liverpool moved on to 91 points – a total that would already be enough to have secured the league title in many seasons gone by.

“These boys are outstanding, they are the reason we are where we are now. Let’s carry on and we will see where it ends.”

With Liverpool leading 4-0, Klopp introduced Alex Oxlade-Chamberlain after 73 minutes for the England midfielder’s first appearance in more than a year.

Oxlade-Chamberlain has been sidelined with a serious knee injury but almost marked his return in sensational style, deftly turning past a defender only to see his shot saved by the legs of Huddersfield goalkeeper Jonas Lossl.

Klopp, though, was delighted to see the former Arsenal man back in action, saying: “It was a wonderful situation and it would have been goal of the season if he could have scored that one.

“Brilliant play, brilliant move, everything until he unfortunately doesn’t hit the ball right. But it was an important step for him and for us.”

Huddersfield boss Jan Siewert was far from downcast after yet another defeat for his rock-bottom side.

He felt they reacted well to falling behind in the opening seconds and stayed true to his blueprint of positive football, which he intends to maintain.

Siewert said: “There were two managers who really liked attacking football and you could see that through the whole of the game.

“After the first minute we were definitely on the back foot, but just with the result because on the pitch we stayed on the front foot, which maybe impressed also them because after the goal the next 15 minutes were ours.

“We showed our fight and said, ‘We go there and we go forward’ because this is my idea of football. I know this, at the end, will lead to results. We stayed brave and we had possibilities.”