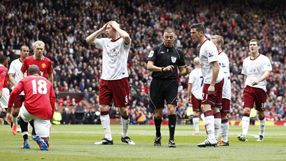 The three points did not arrive without controversy, however, as Ashley Young's theatrical tumble in the penalty area under minimal contact allowed Wayne Rooney to settle the hosts' nerves with a seventh-minute spot-kick.

Villa, who are still in danger of relegation, offered little and United stretched their lead just before half-time through Danny Welbeck's close-range finish.

Rooney scored again with a deflected effort after 73 minutes and Nani added the fourth in stoppage time.

United moved to 82 points with four games left. Resurgent Manchester City, who thrashed Norwich City 6-1 away on Saturday, are on 77. The top two meet at the Etihad Stadium on April 30.

After a shock midweek defeat at Wigan Athletic had offered hope to pursuing City, United manager Sir Alex Ferguson had predicted a quick response from his players and he was not to be disappointed as they completely dominated.

"It was a good result, we played some really good stuff although we were careless at stages but the third goal killed it," Ferguson told Sky Sports.

"There could be twists and turns along the way but we now need to enjoy ourselves. We can never be too confident, my experience says that something could come and bite you in the backside and we want to avoid that."

United had seen their eight-point lead reduced to two in the space of a week courtesy of defeat at Wigan and City's return to form so failure to beat Villa would have opened the door for their rivals who they must still visit this month.

Once Rooney tucked his penalty past Shay Given for his 23rd Premier League goal of the campaign, Ferguson's side never looked in any danger against a modest Villa.

The award of the penalty was contentious, however.

Former Villa player Young cut in from the left into the area and as he pushed the ball past defender Ciaran Clark he appeared to throw himself to the floor directly in front of referee Mark Halsey who pointed to the spot.

It was the second home game in succession that Young had been involved in a "diving" controversy after his part in United's penalty against Queens Park Rangers last week that resulted in Shaun Derry being sent off.

"I think he played for the penalty," Ferguson conceded. "He has definitely taken a fall, it was a dramatic fall and he overdid it but it's a penalty definitely, no doubt about it."

Two minutes before halft-ime United made it 2-0 when Welbeck arrived at the far post to convert a low Patrice Evra cross that had evaded two Villa defenders.

United were in cruise control in the second half and killed off the visitors when Rooney combined well with Antonio Valencia before his shot brushed off James Collins and past Shay Given.

Substitute Nani, on for Young, scored in time added on after Johnny Evans picked out the winger inside the box.

While United moved a step closer to their 20th English title, Villa remain just six points above the bottom three after winning just once in their last 11 league games.