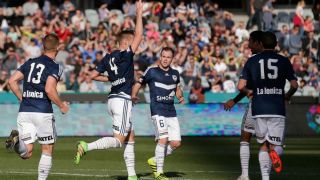 A youthful Atletico Madrid suffered a 1-0 defeat to A-League outfit Melbourne Victory in a friendly on Sunday.

Atletico - missing several of their star figures - could not find a way past a Victory side boasting almost their strongest line-up.

Defender Nick Ansell scored the only goal of the game, heading in a free-kick in the first half at Simonds Stadium in Geelong to seal the win.

Atletico coach Diego Simeone decided not to field a number of his star players, having faced Tottenham just two days prior in the International Champions Cup.

Fernando Torres, Diego Godin, Gabi and Filipe Luis among others remained on the bench, while Simeone gave the likes of Saul Niguez, Jan Oblak and Tiago short spells.

Victory looked strong early and almost took the lead through Fahid Ben Khalfallah, but his volley from an Oliver Bozanic corner sailed just over the crossbar.

Victory lost winger Mitch Austin to an injury, having failed to recover from his opening-minute clash with Emiliano Velazquez, before Simeone replaced Tiago with Thomas Partey at the 35-minute mark.

It was Victory who eventually took the lead on the stroke of half-time, with Ansell rising highest for a Ben Khalfallah won-and-taken set-piece to score with an emphatic header.

Oblak was replaced at half-time by Bernabe Barragan, but both coaches elected to make wholesale changes on the hour-mark - nine in total across the two teams.

Despite the introductions of Saul and Diogo Jota – who was making his Atletico debut – the Spanish visitors were unable to trouble the Victory defence, with the Australian side holding out for a memorable win.