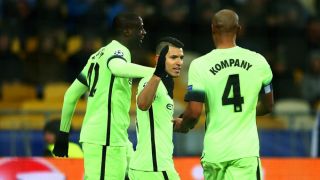 Joe Hart, Vincent Kompany, Yaya Toure, David Silva and Sergio Aguero were crucial to City's 3-1 win over Dynamo Kiev in Ukraine in the first leg of their last-16 tie.

Zabaleta said the win only served to underline the quintet's importance to the squad.

"Those players are like the spine of the team," he said.

"Joe Hart, David Silva, Kompany, Yaya, Sergio - they are the main players of this team.

"Vinny has been out for long periods, Silva the same, we lost Aguero with a bad injury too.

"It's great they are all back and you need your best players in their best form if you’re going to be a strong team."

And after putting in a huge shift in Europe, Zabaleta is backing them to do the same in the League Cup final against Liverpool on Sunday.

"From now til the end is the time when we have to work hard, push together," said the Argentina defender.

"We know the last few weeks have not been great, big defeats in the FA Cup against Chelsea. But sometimes football is like this, you have to be prepared for those moments.

"All you need is to have confidence, belief that this club can progress.

"We've got big games coming up and there is still a great chance for this football club to have success at the end of it.

"Now we must focus on the final on Sunday."

Liverpool are chasing a second League Cup triumph in four years, having last won it in 2012, while City claimed the trophy two years ago.