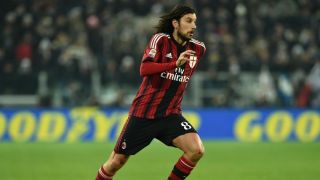 Cristian Zaccardo has hit back at further claims he has rejected opportunities to leave Milan despite playing such a limited role in the first team.

The defender has made only 15 Serie A appearances for Milan since his move from Parma in January 2013.

It has been reported that Zaccardo has spurned chances to leave San Siro as he is happy to see out a contract that will run until next year.

The former Italy international, though, has reacted by insisting that such stories are unfounded.

He posted on Instagram: "For years in silence I tried to do my job better. Never over the top, never against corporate decisions or techniques. I think football should be all those people who put seriousness and passion in the play or in support.

"I read for the umpteenth time that I refused various destinations, I stress, in respect of the football fans, that such information is untrue, or known by me."