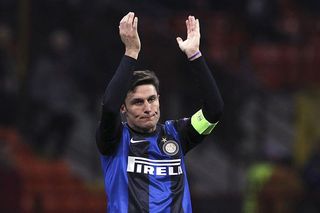 Zanetti's 19th season as an Inter player will be his last with the Milan-based club's president Erick Thohir announcing the 40-year-old former Argentina international will move into an off-field role next season.

Rumours that Zanetti would stay at Inter after his playing career finished have been circulating in the Italian media for most of the season.

"The meetings with Zanetti have been going on for the last couple of months to understand his vision," Thohir said.

"The discussion is done already; he'll become part of the management."

Zanetti has played 613 matches for Inter and will retire after 15 years as captain.

The Argentine has won Serie A five times with Inter, plus has four Coppa Italia titles and winners' medals from the UEFA Champions League, UEFA Cup and FIFA Club World Cup.

Thohir went on to explain Inter will need new signings in all areas of the squad ahead of next season, although he refused to confirm whether Manchester City striker Edin Dzeko would join the club.

"In the January transfers, we only had Jonathan and (Yuto) Nagatomo (as wing-backs), so we signed Danilo D'Ambrosio.

"Do we need another winger in that area? I say yes. So we'll be looking to bring in that kind of player.

"We signed (Nemanja) Vidic (from Manchester United) because we needed leadership at the back.

"Even in midfield we are very few and in attack we need to review also, so in the end how you balance a team is very important."