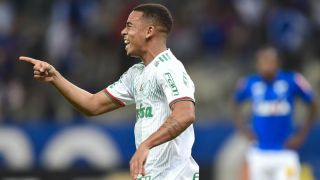 The 19-year-old has been heavily linked with a move to Europe in recent months and Bayern Munich recently approached Ze Roberto to enquire about the gifted attacker.

Nevertheless, the veteran midfielder - who won La Liga and the UEFA Champions League at Madrid and enjoyed two spells at Bayern - his advised Gabriel Jesus to snub Bayern in favour of a return to the Santiago Bernabeu.

"I think he is ready to make the move to Europe," Ze Roberto told AS.

"A few months ago someone from Bayern Munich got in touch with me to talk about him. They wanted to know how he is outside the pitch.

"But I think Real Madrid would be the best option for him. To work with Zinedine Zidane and train alongside stars such as [Cristiano] Ronaldo, [Gareth] Bale and [Karim] Benzema. He would be able to learn from three of the best. That is why I think Madrid would be ideal for him.

"A transfer now seems difficult, though. Palmeiras do not have to sell. I can only see him leaving if someone pays his buy-out clause."

Ze Roberto believes Gabriel Jesus is the best young player to have come through in Brazil since Barcelona star Neymar, adding: "I have nothing but good things to say about Gabriel Jesus.

"He's the best player I've seen come through the ranks in Brazil since I returned from Germany in 2006.

"And I've seen a lot of players come through. But Gabriel Jesus is different. He has some spectacular talents.

"He is not better than Neymar, though. Neymar is from another planet. I have never seen anyone like him. Neymar is extra-terrestrial. When I was at Santos, the senior players showed up early just to see him play in one of the youth teams.

"But after him, Gabriel Jesus is the best young Brazilian player I've seen over the past 10 years. He is a modern player. He has power, pace, technique and is explosive. It is hard to compare him to anyone, because he is unique. He can play anywhere in attack."