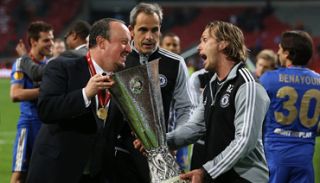 However, slowly but surely their hopes were dashed in each competition until salvation finally arrived in the 68th game of the season at the Amsterdam Arena where goals from Fernando Torres and Branislav Ivanovic sank a battling Benfica side.

Looking back at the ones that got away, Zenden said Chelsea's World Club Cup final defeat by Brazilians Corinthians in Tokyo was particularly painful for both the players and the backroom staff.

"The Europa League is a serious competition which has put us in a small bracket of clubs to have won all three major UEFA trophies but it doesn't make up for the rest of the season," Zenden told Reuters in an interview on Thursday.

"It was especially disappointing to lose out to Corinthians in December. That is not a tournament you get a chance to win too often."

The blond Zenden also acknowledged that Chelsea were outplayed in the opening 45 minutes of Wednesday's final, in a tournament they only joined at the knockout stage after failing to advance in the Champions League.

"Benfica were so much better in the first half and we had no answer to their movement and just could not put any pressure on them," the 36-year-old former Dutch international said.

"At half-time, we said we were lucky that it was still goalless. In the second half, we were much more effective and were very efficient with our goal chances."

Zenden praised Torres after he sprinted half the length of the field in the 59th minute before rounding Benfica keeper Artur to put Chelsea 1-0 up.

"It was fantastic the way Torres scored and you could see how his confidence has grown recently by the way he surged clear of the defence," Zenden explained.

The former Chelsea player was brought back to Stamford Bridge in November when Rafa Benitez, who managed Zenden at Liverpool, was appointed as interim coach following the dismissal of Italian Roberto Di Matteo.

The Dutchman gave an insight into the role he played in Wednesday's victory that helped Chelsea join Ajax, Bayern Munich and Juventus as the only clubs to win the Champions League, Europa League and the now defunct UEFA Cup Winners' Cup.

"Part of my role in the final was to prepare the players in two team meetings on the day," Zenden said. "In the first one, we paid attention to Benfica's set pieces, while the second one was more about the overall tactical plan.

"During the match itself, I analysed the game and then I spoke to Rafa before he started his half-time team talk.

"We told goalkeeper Petr Cech to keep his defenders alert because after every first half set piece, two Benfica players were left unmarked at the far post when the second ball came back into the penalty area."

Ivanovic's match-winning header, which came from a right-wing