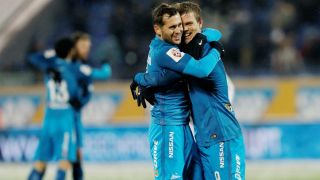 Zenit have announced that they have been given final approval to move to the new Stadium St Petersburg.

The Russian Premier League title-chasers will play their last match at Petrovsky Stadium against Anzhi Makhachkala on Saturday, after the Russian Football Union (RFU) and UEFA sanctioned the move.

Mircea Lucescu's side will then take up residence in the new 62,000-seater venue in Primorsky Victory Park on St Petersburg's Krestovsky Island.

The stadium – which will host the final of this year's Confederations Cup and be used for the World Cup in 2018 – was designed by Japanese group Kisho Kurokawa Architect & Associate, after their plan was chosen by a competition committee.

Zenit's first match at their new home will be the league meeting with Ural on April 20.

This Saturday we'll say goodbye to the Petrovsky! April 6, 2017