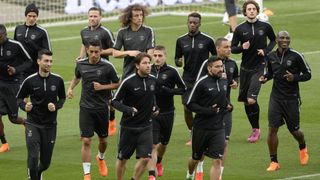 PSG welcome back Ibrahimovic and Verratti for the return leg at Camp Nou on Tuesday, but the French champions will be without captain Thiago Silva, as well as Thiago Motta and Serge Aurier.

"Obviously, it's going to be very difficult for Paris-Saint-Germain to score three goals in the Camp Nou. However, that team can do it," Zidane told reporters after the annual UN Match against Poverty on Monday.

"PSG have the players to do it. Some will be back for that game. During a game, everything is possible. Everything is allowed. It's going to be the most difficult challenge. People think they will not go through. It's at that moment that the players can achieve everything. I hope for them that they could create some problem to Barcelona.

"I remember that when we played against the great AC Milan, we lost 2-0 during the first leg. We've then won 3-0 at home. It was the great period with [Franco] Baresi, [Paolo] Maldini and everyone.

"That's not exactly the same, because in Paris there are great players, experienced players. During one game, everything is possible."