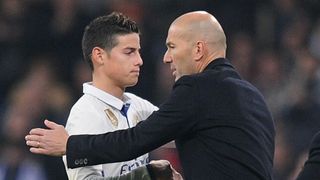 Zinedine Zidane refused to be drawn into discussions over James Rodriguez's future at Real Madrid, insisting he and the squad are interested only in Wednesday's crucial LaLiga clash with Celta Vigo.

Reports this week have suggested James is set for a big-money close-season move to Manchester United after falling down the pecking order at Santiago Bernabeu.

The attacking midfielder moved to Madrid after a stellar 2014 World Cup that saw him win the Golden Boot award, but has found playing time limited since Zidane took over in January 2016.

But Zidane was keeping his cards firmly to his chest when asked about James' future at a pre-match news conference.

"James is here, that's not up for question. He's with us," he said.

"He didn't train [on Tuesday] because he has a knock, but James is here and we're thinking just about the three games we have left this year."

We're all set for our penultimate league match of the season!Wednesday21:00 CESTBalaídosMay 16, 2017

Another player whose future in the Spanish capital is believed to be up in the air is Spain striker Alvaro Morata, who has spent much of the campaign playing second fiddle to Karim Benzema.

Morata was pictured seemingly snubbing a handshake from Zidane when substituted in Sunday's 4-1 rout of Sevilla.

But Zidane, whose side need four points from their remaining two matches to win LaLiga, insists he was not the cause of the striker's irritation.

"Morata wasn't angry with me, he was angry at something else," he added. "I don't know what but it can happen, it's fine. We spoke and that's it."

Zidane was also asked about Gareth Bale, who remains an injury absentee after aggravating a calf issue against Barcelona in last month's Clasico.

It has been suggested Bale will be fit for the Champions League final against Juventus in Cardiff on June 3, but the Frenchman reiterated his focus is purely on Celta.

"Listen, right now is not the time to talk about that," Zidane said.

"I can tell you how he is, he's a lot better, he's out on the pitch, not with the group, but that's positive.

"We're happy with that, but we just have to think about the game [with Celta] and that's it. Gareth isn't with us."