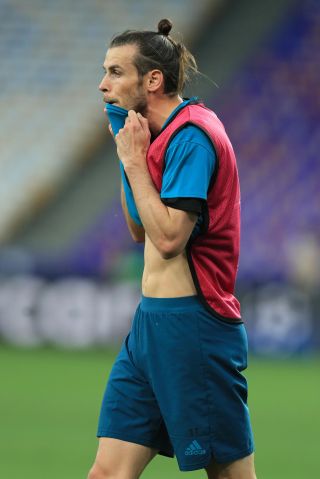 Zinedine Zidane insists he has never fallen out with Gareth Bale and says it is “nonsense” that he wants the player to leave Real Madrid in January.

Real forward Bale was heavily linked with a summer move to China amid rumours of a break down in his relationship with manager Zidane.

The 30-year-old has not played for the Spanish club during the past month but was on Tuesday called up by Wales manager Ryan Giggs for decisive Euro 2020 qualifiers against Azerbaijan and Hungary.

Bale will once again be absent when Real host Galatasaray in the Champions League on Wednesday because of a reported calf injury.

Zidane says he wants Bale to remain in the Spanish capital until the end of the season and feels fans should not question the former Tottenham man’s desire to return to fitness.

“Right now, Bale is not available. That’s all I can say,” said Zidane, according to the club’s official website.

“The player wants to get back fit, we mustn’t doubt his motives. I feel like he wants to be back with us.

“The fans should look at the positives too, they say I want him to go in January, but that’s nonsense.

“Everyone is entitled to talk about me and the job I’m doing, but they shouldn’t put words in my mouth. I want Gareth to stay until the end of the season.”

Speaking about his relationship with Bale, Zidane added: “We say hello to each other every day. I love my players.

“We can’t be as close to all of them but I’ve never had any problem with Bale. The difficulties came over the summer when he could have left.”

Since starting Real’s 4-2 win over Granada on October 5, Bale’s only action has been for his country, during qualifiers against Slovakia and Croatia.

He has been left out of Zidane’s subsequent four squads and attracted criticism for leaving matches early.

However, his manager again talked down concerns about Bale’s commitment.

“The situation now is that he’s here, he’s a good player and you guys should stop focusing on the fact he’s left before the end of games because the same happened when I played, I could leave before the end,” said Zidane.

👔🗣️ #Zidane: "It's both responsibility and excitement to play a match like this at home. What we want to do is play a good game, and for that we have to be prepared."#RMUCL | #HalaMadridpic.twitter.com/HWVv5Vb5LO— Real Madrid C.F. 🇬🇧🇺🇸 (@realmadriden) November 5, 2019

“The important thing is that he’s there when the game starts and at half-time to support the team.

“Everyone is entitled to do that, they’re all behind the team and want to see us win things.”

Despite Bale’s recent lack of action and doubts about his physical condition, Zidane says he is powerless to prevent the player from joining up with Wales.

“I’m not sure what the conversation was with his national coach,” said the Frenchman.

“His country has called him up and has the right to do so. It’s a FIFA fixture and we won’t get involved.

“We’ll see how we go this week and then decide if he’s ready or not to go with his country, but at the moment he’s not.

“He has to go, because he’s been called up. We’ll see what happens.”

They already face a fight to reach the knockout stages this term after taking just four points from their opening three Group A games.

“We know the situation we’re in and what we have to do,” said Zidane ahead of Galatasaray’s visit to the Bernabeu.

“I’m not worried about whether or not it’s (like) a final because all we have to do is focus on putting in a great performance.

“The fans and the people behind us want us to win it, put on a good display and pick up the three points that effectively seal qualification.”