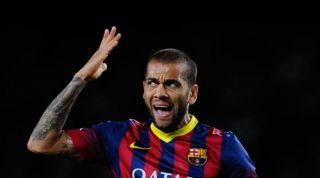 Sao Paulo president Carlos Miguel Aidar had claimed that Barca are keen to sell the Brazil international and bring in Douglas as a replacement.

Alves has just a year left on his contract with the La Liga side and several clubs have been linked with a move for the 31-year-old ahead of the new season.

On Tuesday, Zubizarreta played down talk of Alves being set to end his six-year stay at Camp Nou but also stated that the club are still in the market to bring in more new faces.

"Dani Alves is a Barcelona player. He is an extraordinary player and he has trained very well through pre-season," Zubizarreta said in a press conference to unveil big-money signing Luis Suarez.

"As for other players, we are always working on the transfer market, to try to give the coach as many options as we can in all positions and all competitions.

"But neither I or Mr Mestre [Barcelona vice-president Jordi] are going to be mentioning any names. I don't think that would be appropriate."