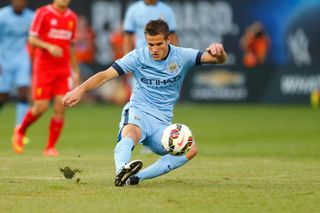 The Argentina Under-20 international joined the Premier League champions from Racing Club earlier this month and impressed on City's tours of the United States and Scotland.

Zuculini featured as a substitute in the Community Shield at Wembley, but Manuel Pellegrini has now opted to send the 21-year-old out on loan.

Sunderland were linked with a move for Zuculini, but he will instead continue his development in Spain with Valenica.

The Liga outfit revealed that their latest signing, a defensive midfielder, will undergo a medical on Tuesday before facing the media.

Zuculini made his debut for Racing Club in the Primera Division in his homeland aged just 16 and went on to score 10 goals in 92 games for the club before making his move to City.