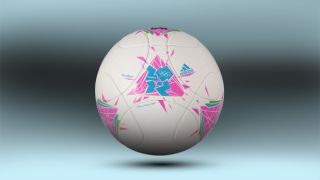 Thanks to our friends at Adidas, FFT can exclusively unveil the ball that could power Team GB to glory.

Stuart Pearce and his charges can breath a sigh of relief, because this sphere has been designed to behave itself, rather than darting around like a plastic bag in a tornado.

The ball features a series of triangular panels that are thermally bonded together to ensure a true, stable flight path.

It also promises to aid players who possess a 10-yard pass for a first touch – covering each panel is a grip texture, which supports boot-to-ball contact and enhances control.

With the Adidas boffins providing the technology, the manufacturer turned to the Great British public for inspiration on naming the orb.

Over 12,000 names were suggested, but it was Robert Ashcroft from Derbyshire who got the nod with his cockney rhyming slang-inspired ‘Albert’.

The Albert, which carries the London 2012 logo and colours, will be used throughout the football tournament, which starts on July 25, two days ahead of the official opening ceremony to the Games.