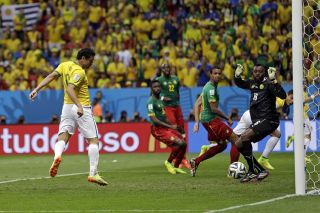 On a football pitch, you’re always fighting for space. What you need to do is move in different ways, so you can jink away from your opponent. For example, if your first run is to the back post, make your next run to the front. If you keep moving, switching between defenders and positions, you’ll eventually get free and have a chance to score. When I was at America Mineiro, Reinaldo, a Brazilian legend, told me to stand side on against a defender, rather than with my back to them, because this would enable me to pivot and create space.

Keep one eye on the goalkeeper

I’m always looking at the goalkeeper to see if he’s out of position. If he’s wearing a very bright kit you can spot him more easily. Sometimes you’re not looking at the keeper, but your peripheral vision allows you to see what’s around. If his kit is fluorescent green it helps you see his position. More often than not you have millisecond to make a decision and shoot. I always try to do a one-touch finish, especially when I’m up against a keeper who’s fast off his line. When I see them coming I try to surprise them with a quick finish.

I had a coach called Levir Culpi, who always told me, “Fred, when you shoot aim for the bottom of the post.” We call it ‘the goal’s cheek’. It’s the side-netting, just inside the post. I always search for this spot. No need for power, just place the ball there – just like I did when I scored my second goal against Spain in the Confederations Cup final. It was the best coaching advice I received as a striker and I’ve never forgotten it. It will increase your chances of scoring. Culpi also said: “Fred, I’ll make you the best striker in Brazil!”

Want to add a killer instinct to your game? Try this drill from Fluminense’s nerveless finisher

“I passed my trial at America Mineiro thanks to my finishing. I didn’t perform very well, but my finishing was good.

“Volley, bicycle kick, instep – every type of shot has to be perfected. I didn’t make any mistakes so the coaches gave me a chance.

“I have some finishing drills that I love to do on the training ground. I start by standing just inside the penalty box with my back to goal and the coach stands five meters away from me. He passes the ball to me, I give it back, he passes it back again and I turn and shoot first time. Left, right, left, right, always aiming for the ‘cheek of the goal’.

“To progress the drill we take up exactly the same positions, but this time the coach throws the ball into me and I volley it on the turn, which is difficult, but just like a real-match situation.

“Then the coach stands on the goal-line and passes the ball into my feet and I try to strike the ball into the back of the net with a first time-finish.”

For more football tips see:
Olivier Giroud: How to create and conquer
Ole Gunnar Solskjaer's guide to finishing
Rooney: Big match preparation
Darren Bent: How to be a maestro of movement
Ibrahimovic: How to play as a targetman
Andy Cole: Finishing a one-on-one
Jermain Defoe's six-step guide to striking
Michu: Break through the defence
Demba Ba: Hit the target every time
Rickie Lambert: How to hit the back of the net