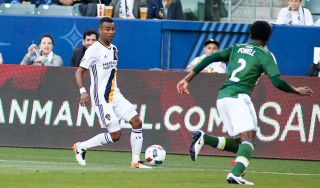 “Get out tight to him, and get on his first touch as quickly as you can. Show him inside to your centre-back or midfielder. When he puts his head down to take another touch or cross the ball, he doesn’t know where you are – that’s when you put your foot in and make the tackle. And when you make the first tackle, make sure it’s a strong one so he knows he can’t keep doing all the tricks all the time.”

“Don’t get too tight because a fast winger will just knock it past you and run. Back off a little bit, let him have two or three touches then make the tackle. Against a tricky winger you let them have one touch and get tight, but against someone quick you want to drop off a little more so you can bide your time and wait until the moment is right to make the tackle. Show him down the line to block the cross. If he does manage to get past you, you’ve got a chance to stop the cross.”

“Playing against somebody like David Beckham – a player who wants to get an early cross in – you need to stay right on his feet. If a player has a quality delivery, as soon as they get it out of their feet they will just cross the ball so you want to man-to-man mark them, near enough. You stay on his touch, don’t let him take two touches – make him play the ball backwards to his full-back or inside to one of his midfielders.”

“You’ve got to mix it up. Someone like Kevin Davies is going to be bigger and stronger than you so when the ball is in the air you nudge them slightly because it makes them think I’ll be standing right on them next time, but then I’ll jump early and try and get elevation off him to win the ball. Or just try and win the second ball – step off him, let him flick it on and then intercept it. It doesn’t matter how big and tall the opponent is, if you make your presence known at the right time – just as you’re jumping – it’s going to put them off their game.”

“If the winger is trying to wind you up, do the same to them. Try as much as you can to put them off and get in their head; get them thinking about something else. You can be friends off the pitch, but when you’re on the pitch, you want to win. If you kick someone, say sorry, help them up and explain it wasn’t meant.”

“If you’re playing against an attacking full-back you have to make sure he keeps having to defend. If the full-back pushes on he’s going to leave a space in behind him, so as soon as your team gets the ball, sprint into that space and he will have to chase you. You do have to battle one vs one sometimes – if you go, he’s going to go; and if he goes, I’m going to go. But you have to have a good relationship with your winger, because sometimes he’ll have to track him. The key is to fight fire with fire and back yourself to come out on top.”

Ashley Cole wears the new CTR 360 Maestri II (pictured above), a boot that helps players to receive, control and distribute the ball to Take Control of the game.  On-sale now. Visit www.nikefootball.com for more info

Fore more football tips see:
Ryan Bertrand: Be ready for any challenge
Aymeric Laporte: The art of being a modern defender
Suffocate the opposition
Chris Smalling: How to be the complete defender
Richards: Dealing with different types of attacker
Kyle Walker: Stop that, twinkle toes!