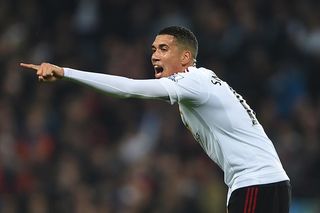 “You have to be prepared for a lot more headers and tackles when you are playing as a centre-back. But in this position you don’t want the opposition running at you; it’s more about trying to intercept, rather than tackle. If you can keep the opposition striker facing their own goal at centre-back you’ve done your job, but at full-back they’re usually already turning towards goal so you need a different approach.”

“At full-back, stand your ground and wait for your opponent to make the first move. If you dive in and mistime a challenge, you’ll give away crucial free-kicks in dangerous positions. You need to stand side-on against your opponent and stay on your feet. Going to ground is a last resort. When they’re close to the box you want to keep them down the line regardless of whether they’re left- or right-footed – your primary job is to stop the cross. If they come inside you can get support from the centre-backs and stop the shot.”

“A lot of the time at centre-back you’re the last man, so you have to make sure you’re communicating with full-backs, your other centre-back and your midfielders. You have to focus on reading the game and sensing the danger, because as well as tracking the striker’s runs, you have to keep an eye on the delivery from out wide. As a full-back, you need to stop your man, while also helping out your centre-back and supporting your winger. It’s a hard shift up and down the line, so fitness is vital.”

“At full-back you’ve got to be aware that you’re not just up against their winger, but their full-back as well, and their strikers if they come out into the channels. Dealing with multiple threats requires a high level of concentration. In the modern game, full-backs don’t just defend, they also attack, but you can’t afford to let your focus slip, neglecting one or the other. Stay switched on and the rest will take care of itself.”

Build a body for battle

“It’s important to understand the different physical demands from playing as a centre-back and playing as a full-back. Full-backs should concentrate on lots of speed and quick feet drills because they will be coming up against fast, tricky wingers so you have to be mobile and sharp. Centre-backs need to be physically strong and quick, because you’re coming up against pacy, powerful players.”

“Playing in one half of the pitch, set out your back four and have a team of six players attacking your goal. Because you’re outnumbered this drill will work the back four hard, demanding communication, organisation and discipline. Everyone has to concentrate and do their job, dealing with a threat from all angles – like in a game. Each defender has to stay focused on their job: full-backs stopping crosses from out wide and centre-backs dealing with the danger through the centre.”