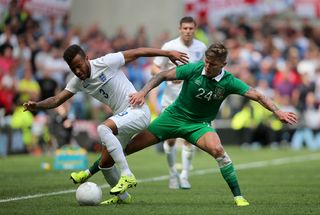 Get all up in their grill
“As soon as a skilful player receives a pass into feet you want to be there, right on top of them. Don’t give them time or space to run at you and create danger. Make sure it’s you that is dictating where the play goes, rather than them. Nine times out of 10 the tricky wingers are a bit soft, so you want to get in their face as often as possible. Be physical. Putting pressure on them will disrupt their rhythm. You want them to be worrying more about you.”

Give speedsters a yard
“Quick players are the ones you have to be wary of. When they get the ball you need to get straight on them. If they find themselves with time on the ball and space to run, give them a yard. Don’t get caught side-by-side with them because they will beat you in a race for a through ball. You want to be side-on, on your toes and anticipating the pass so that you have a yard or two on them. Stay one step ahead mentally and you’ll always get there first.”

Stop the cross
“Some players are slow but make up for it with a fantastic delivery. Again, like any player with ability, you want to close them down quickly. If they do get away from you, run them down and block off the flight of the cross. Make them do the things they’re not good at. If they’re a left-footed player and operate on the right, force them down the wing onto their weaker foot. Focus on shepherding them away from goal and off their stronger foot.”

Use brains over brawn
“You need to be clever against more physical opponents. Show that you can look after yourself and let them know they can’t bully you. Don’t be overly aggressive all the time. Be smart: pick and choose your battles. If you know they’re going to try to batter you into submission, make sure your body is always in the right position. For example, if you nip in front of the player and win possession, use your body to protect the ball and draw a foul.”

Dictate from defence
“When I see the opposition’s full-back racing towards me, waiting for the diagonal ball, I don’t go rushing out to him too early because he poses the least danger, being the furthest away from goal. I’ll stay narrow and position my winger inside slightly. This encourages the pass, which is what I want to happen. Then, as I see the ball get pinged 80 yards to the full-back, I’m out to him straightaway. I make sure I get to him the same time the ball does.”

Stop a striker’s movement
“Strikers that pull out wide can be difficult to deal with. They drift in between you and the centre-back, making you question who is marking him. If the opposition play with two forwards, make sure you stay narrow, stopping them from running into the channels. Close down their space and they won’t be able to create that indecision. Stay like that until the ball eventually goes out wide – you’ve always got time to get out to the winger or full-back that you’re marking.”

For more football tips see:
Be a full-throttle full-back
Full-backs and wingers: Forge a menacing partnership
Glen Johnson: The attacking full-back
Micah Richards: How to raid from deep
Bombing forward for full-backs
Peter Taylor: Wingers and full-backs working together
Full-back: How to attack