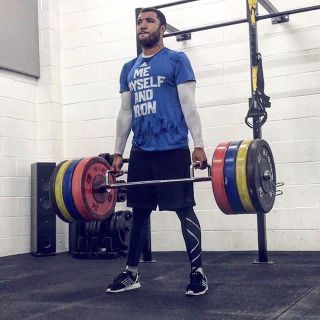 Do you reckon you can become a Premier League player without being an elite-level athlete?
No. I think you have to be technically very good, but now you’re starting to see the emergence of a lot of lower league players who are willing to put the hard yards in. You look at people like Jamie Vardy, Andre Gray and myself: we’ve adapted to Premier League football because we’ve always been willing to put the extra physical work in. Lower down the leagues you have to just run for everything, so that’s why we’ve done well.

You’ve done some work with Anthony Joshua’s personal trainer, Jamie Reynolds, how did that partnership come about?
I was one of the first players he worked with. About six years ago I saw a friend of mine training with him and I thought ‘That’s a bit different.’ I’m always open to trying new things to develop myself physically and the training we do is really high intensity and tailored specifically to my game. He’s the first trainer who told me what physical attributes I needed as a striker, my strengths and weaknesses, and then said, “I want you to keep working at your strengths.” I’d never worked with anyone specifically on my game before – previously I’d just done a training programme that had been developed for a whole squad of players.

How often do you work with him?
I do a two-or-three-week camp with Jamie before I go back to Watford for pre-season. I do a lot of footwork and agility training so I have that sharpness. Rather than catching up during pre-season I’ll already be ahead. We also do some work together during the season but we tailor it to how many games I have. It’s not like a boxer who has a 12-week camp and knows exactly when they can train every week. If you have three games per week, it’s almost impossible to do strength and conditioning work, any big heavy lifting fatigues the body when you need to be recovering for your next match.

You’re good friends with Joshua – are there similarities between boxing and football fitness?
No they’re completely different. I watch a lot of boxing and I do a bit of boxing training myself.  Boxing is a lot more emotional, if you get punched in the face, your natural reaction is to get angry and react, but you can’t do that. You have to keep everything under control. Under the lights, it’s incredibly hot as well; even when you’re ringside you are sweating. As well as the environment being different, boxers also use a completely different energy system. We play on a Saturday and Tuesday for about 11 months, whereas they train for 12 weeks to prepare for a fight on a Saturday night. They have a three-month training camp for one fight and they do that maybe three times a year. I think our bodies are put through a lot more pain I’d say.

Do you need a lean physique to perform so many sprints each game?
Funnily enough, I’ve always been called bulky by away fans. They will phrase it slightly different to that but they always suggest that I’m a big lad. However, you can’t be the team captain and set an example if you’re not fit. The lads wouldn’t stand for it and the manager definitely wouldn’t. It’s probably twice as hard for me to avoid putting on weight because as soon as I put on a couple of pounds people everyone can see it so I have to really keep on top of it.

Have you felt the impact of your gym work on the pitch?
The strength work I have done has given me a real mental edge because I think I’m bigger and stronger than everyone else. The more specific stuff I’ve done with Jamie has paid off with some of the goals I’ve scored. The goal against Southampton last season was a perfect example. The ball just bobbled up and I reacted to it really quickly and lifted it into the top corner. The reactive work I’ve done with Jamie has really helped with goals like that.

What does your daily diet look like?
It’s pretty colourful and varied. I have a friend who has set up a food company who are supplying Joshua and lots of Premier League footballers and I’ll use his products too. I eat a good variety of quality protein. One day is steak; the other is chicken, then mincemeat. It’s all packed up and ready to go. I have 50-100g of protein, lots of different fruit and vegetables and then about 25g of sweet potato.