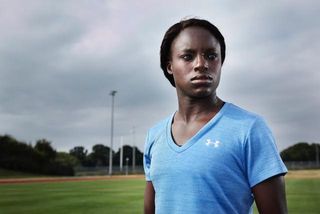 Hi Eniola, what does a typical week look like for a Chelsea Ladies player?

Well, I train six times a week now. We follow a periodisation programme, which means we’ll have days of high intensity work and then we’ll lower the workload so we’re fresh for the weekend. I value that a lot – my injury rate is very low because of that and I’m able to perform at my maximum. I’m pretty strict with my nutrition as well.

Speed is one of your best attributes – what do you do in the gym to maximise your pace?

I do a lot of speed and power work. In the gym I’ll do squats with low reps and high weight, followed by a burst of movement. Squats are explosive, but then I’ll sprint so the maximum power is being transferred into a sprint. I do box jumps – high velocity, high-speed movements. These exercises really transfer on to the pitch. I’ll do this once a week and then a lot of the focus is on mobility work. I also do soft tissue work to make sure my calves, hamstrings and thighs aren’t too sore after training.

You’ve posted several training videos on Twitter – how often do you do individual sessions?

It depends on how intense my week is in terms of training and playing games. If I’ve had a light session then I’ll go back out on to the training pitch and practice finishing in a certain part of the goal, for example. I like to do lots of repetition and situational finishing – shooting from areas of the pitch that I do regularly in a game - so it relates to the match. That’s far better than just smashing a ball into an empty net.

You said recently that you’re motivated by a fear of failure...

I think to be successful you have to really hate losing, almost as much as you enjoy winning. When you get to a point where you’re winning consistently, to maintain that mentality you have to really hate losing. I’d say it’s more a strong dislike of losing than a fear of failure, that’s probably a better way of phrasing it. That said, I do appreciate the value of failing, that’s been part of what’s made me successful, in learning from failure. I’ve read Alex Ferguson’s book and he said more often than not, Manchester United won the title the year after losing it. They wouldn’t have been able to do that had they not learnt from failure.

You’ve played under a number of coaches – what qualities do you think make a great manager or leader?

I would say it’s openness and being honest with players. There’s an understanding of the players’ personalities. At the top level it’s about managing human beings, as much as it is about coaching. The best managers are able to motivate players and have genuine conversations so you form that relationship and you want to play for that manager. Emma Hayes has been my best coach and she has those qualities, she creates a great challenging and learning environment for players.

You and your brother (Fulham's Sone Aluko) are both footballers – did you have a competitive relationship growing up?

A lot of people ask me that but there wasn’t ever any competition between us. We just played together and for him I think it was a cool for him to be able to say  ‘oh, by the way my sister’s a footballer’, and it was the same for me. Football was a form of expression for both of us.

Do you see similarities between your playing styles?

Yeah, I think we’re very similar players. We’re both forwards and we’re speed players. He can play in the No.10 role and is probably a little bit more creative, whereas I’m more direct – I play on the wing or straight down the middle as a No.9. I wouldn’t mind his left foot!

Do you talk about football and your experiences on the pitch?

Absolutely, he’s the number one person I speak to about football. I talk to him if I’m nervous before a game or if I’m struggling a little bit. He’s a really good soundboard to have because he’s played at the top level and understands the experiences I have. For me to have that kind of wisdom to tap into is great.

You were an entertainment lawyer before turning professional – how did you balance two careers?

Luckily for me, I was working in sport and entertainment, so the firm that I worked for were very understanding. I could balance my time a lot better. When I turned professional I had to put law on hold to commit myself to life at Chelsea. It’s amazing how much the skills of lawyer transfer to football. Little things like sending emails and doing public speaking. When I’m negotiating a contract you get a lot more respect when the other side know you’re a lawyer!

You recently became the first female UK athlete to be signed by Under Armour – are you enjoying being a role model for the women’s game?

I think it’s really important for me to be a reference point and a role model for women, whether they’re playing football or not. I remember growing up and I felt empowered by my female role models. I want to do that for young girls now and boys as well. I want to be remembered for that. Playing football and scoring goals is great but what people remember you for is who you are as a person and how you inspired them.

Find your top speed up a hill

Be first to the through ball