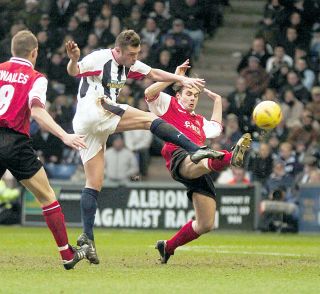 PUT THE WORK IN

I was working on building sites from a young age, so work ethic was instilled in me. I’d be up at 6am every day and wouldn’t finish until 5pm. To stay fit I’d get my work mates to drop me off four miles away from my house and I’d run home. On top of that I’d train for Halifax on a Tuesday and Thursday night and play on a Saturday afternoon. If you want something badly enough you have to be willing to put in the effort.

GET A GYM MEMBERSHIP

When I joined Fulham I realised pitch and gym strength are two different things. We had some big strong lads – Philippe Albert, Chris Coleman, Barry Hayles - and I fancied myself against any of them. But in the gym I struggled to lift weights. That was the hardest thing about turning professional. Kevin Keegan used to drill it into me - he said I had to take my physical conditioning seriously if I wanted to play at the top level.

I remember being on an away trip and I was sharing a room with Steve Finnan. We ordered some room service but didn’t realise all the orders went through the manager’s room. Steve ordered a salad but I went for a burger and chips. Keegan knocked on our door with two plates and asked who was eating fast food the night before a game! The next day he fined me £500 in front of the whole squad. To be a pro you have to be disciplined with your diet.

There are some fantastic players in non-league football. If you’re one of them you only have to look at Jamie Vardy for inspiration. His story is incredible. He’s someone who kept his feet on the ground and believed in himself when others maybe didn’t. He’s 29 now and playing for England. If you think you’re good enough then don’t give up. I didn’t turn pro until I was 23/24 - it’s never too late to make it.