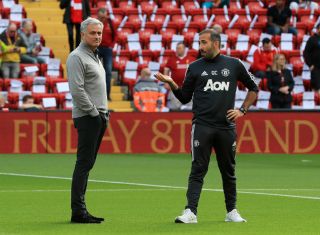 Attention to detail
On his first day at Chelsea, he ordered everyone to report to the training ground - players and staff - for 7am. I had to get myself across London from Gerrards Cross at that time in the morning - it was a test to see how committed everyone was. Everyone got there on time apart from one player – Yves Ma-Kalamby.  He made sure he knew about it. He then handed everyone a file for the first four weeks of the season. It had everything in it, from opposition, training, to how many points he wanted and the number of clean sheets. It gave the players a clear focus of exactly what they needed to do. They won their first four games and conceded just one goal.

Inspiring confidence
Jose was comfortable speaking to the press and he was confident in his own ability. His biggest asset was his own self-confidence. He convinced the press and the players he was the real deal. He didn’t rule with an iron fist, but he brought with him two assistants, Baltemar Brito and Rui Faria, who were very vocal and passionate  – they were warriors. He built a coaching team who really complemented one another - his assistants would really test the players and test each other. Jose is a good motivator and psychologically he's very good at getting in players' heads.

Coaching the coaches
Andre Villas-Boas did all the scouting reports at Chelsea, but he would go out every night with Jose and they would eat together and talk football. They were a team. They won things together at Porto, Chelsea and Inter. Brendan Rodgers was brought in to do the youth team through Steve Clarke. I wanted to bring in Gus Poyet, but in the end they went for Brendan and he watched the way Jose worked, he was methodical. Steve Clarke would watch Rui and Jose. The day after Steve Clarke would be doing the exact same thing and Brendan would then watch Steve. That was a big part of Jose’s management; he wanted his coaches to observe.

Trusting the players
Mourinho is very relaxed; but he’d have rules and curfews about going out. You had one chance or you’d be gone. If you showed that you could be trusted, he would give you more rope. Gianluca Vialli was paranoid about players eating pasta, ketchup, coke and things like that. Mourinho told them they could eat what they wanted because he felt it was important the players were happy. But he stressed that they had to perform. John Terry played nearly every game under him because there was a massive mutual respect there. There has to be mutual respect or it doesn’t work. He also understood how to keep players’ attention. He was punch and to the point. He explained how he wanted things to be done very quickly.

Smart recruitment
When Jose first came in, he wanted Didier Drogba because he’d given him hassle for Marseille the season before. We also spoke about David Villa for a long time but he really wanted Drogba. We brought in Mateja Kezman and Ricardo Carvalho and Tiago as well. The manager had this picture in his head of what needed changing. He’d send me out to look at specific targets and report between him and Villas-Boas. There was a triangle and keep it between ourselves. When I was Ken Bates’ right-hand man, I’d move the transfer forward with Ken. Jose did it with Roman and Peter Kenyon. Jose always loved a player with flair and ability.

How to improve your confidence as a coachDo former players make good coaches?Making the transition from player to coach6 ways to improve your leadership skillsThe DNA of a great coach