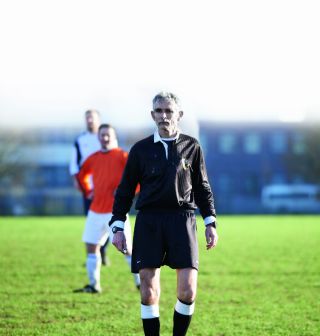 THE STICKLER
Overly officious and offensively pedantic (“That throw-in is three yards further back, thank you”), The Stickler is yet to grow meaningful stubble but has read the Laws of the Game 16 times. Still, he turns up on time and actually knows what he is doing, even if he will insist on measuring the height of the corner flag. How to identify him? The two spare whistles are a giveaway.
DO encourage him before kick-off to allow a flowing game.
DON’T give him a wedgie.

THE TRY-HARD
Everybody’s mate – or so he thinks. Overly chummy, he’s from the Mark Clattenburg school of refereeing, but without the experience, ability or, vitally, authority: his strictest tone is a pleading “Come on, mate” as an opponent rips off your full-back’s head. The Try-Hard isn’t a doormat (see: The Coward), but he’d rather share a laugh than show a card.
DO firmly remind him of his responsibilities once the first horror tackle goes unpunished.
DON’T mock his ‘banter’. It’s fine to be friendly as long as he does his job.

THE COWARD
“Red free-kick.” “What the f***, ref?!” “Erm… actually, yes: blue free-kick.” “What game are you watching, ref?” “Oh God. Drop ball?” The Coward is a fine, judicious official – until a player contests his decision. Then he loses confidence, fearing losing his teeth. In short: easily intimidated.
DO encourage him to have belief in his decision-making, or – depending on your ethical code – tell your players to question every single decision, whatever it is.
DON’T let his flip-flopping frustrate you. If it persists, just refocus on your game.

THE OLD CODGER
Arriving promptly in an impeccably ironed kit carrying Dubbin and homemade sandwiches, The Old Codger has been officiating for 40 years and won’t hesitate to remind you of the fact. His knees have seen better days, but underestimate him at your peril: fail to get him onside and he’ll give you nothing all game, even if he can’t remember why that is.
DO nobble him early, greeting him with a hearty handshake and a patient ear. “You refereed an FA Cup match in ’87, you say? My word. Please, tell me more...”
DON’T give the old chap a heart attack by sneaking up on him. Not if you’re winning, anyway.

THE OPPOSITION’S 12TH MAN
AKA: your worst nightmare. The ref hasn’t turned up and the other team have a spare man. You know what’s coming – but you can’t stop it. For the next 90 minutes, you’re his bitch.
DO tell your team-mates to keep calm and dial down the 50-50s. It’ll make winning harder, but no harder than playing with eight men.
DON’T engage him in any verbals. At all. Not even sarcasm. He is looking for any excuse to flash the red card so don’t give him one. Just let his tyres down at full-time.

REFFING FOR DUMMIES
The man in black’s AWOL and you’re left holding the whistle. Here’s a crash course…

1 Communicate
Get the players onside, says ex-ref Mark Halsey: “When you do the toss, tell the captains: ‘I’m not a qualified referee but I’m doing it so you can have a game, so I won’t tolerate any backchat.’ Be firm.”

2 Watch the offsides
If you’re lucky enough to have linesmen, check they know the offside rule – or do it yourself. “Decide whether to try to take up a position where you can see if a player’s offside,” says Halsey, “but it is difficult.”

3 Trust your instinct
“Don’t change your mind,” advises Halsey, who refereed more than 250 Premier League matches. Having self-confidence will assert your authority. “Just give what you see,” Halsey adds, “and enjoy it.”

Recommended for you:
Influence the ref
How to scout the opposition
Confidential Sunday League scouting
How to impress at a trial
“Get it in the mixer!”
Ultimate guide to pre-match preparation