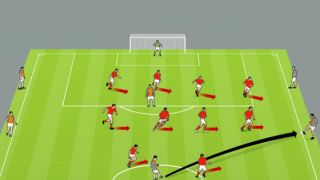 “To begin this drill set your team out as if you were lining up for kick-off. At Arsenal we played 4-4-2. The coach stands in the centre circle and positions four coaches on the sidelines – two on either side.

Then you have a coach stand in between the back four and the midfield. Once everyone is in position the coach in the centre circle (coach A) plays a pass to any one of the five other coaches.

If the ball goes out wide to coach F the team have to move across at speed to close the space down as a unit. It’s important the players learn to cover one another.

Once the space has been shut down coach F plays the ball back to coach A, the team resets and they play another pass to a different coach.

I like this drill because you do it without opposition, which helps you to focus on positioning and spatial awareness.

The aim of the drill is to help the players learn team shape, get compact and keep the right distances between one another.

Both Arsene Wenger and Roberto Mancini like this drill and use it.”

Patrick is an ambassador for Western Union’s new PASS initiative, turning every pass in this season’s UEFA Europa League into funding for one day’s education for young people around the world

For more football tips see:
Aaron Ramsey: Overrun the opposition
Marco Verratti: How to be a deep-lying playmaker
Shield the ball like Philipp Lahm
Lucas Leiva: The spoiler