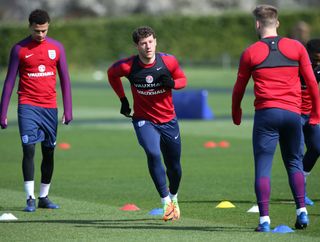 The buses Barkley used to take to complete the hour-long journey to Everton’s old academy base in Netherton, on the outskirts of Liverpool.

EXERCISE
Aeroplane push-ups
Get into the press-up position with a dumbbell in each hand. Perform a classic press-up and as you come up, pull one dumbbell off the floor and open your body out, lifting the dumbbell to the sky with your arm fully extended. Return the weight to the floor, do a press-up and repeat on the other side.

STAR IN THE MAKING

“Ross is such an emotionally stable character, that is what sets him apart,” eulogised former Everton manager Roberto Martinez. “Nothing fazes him. I’m not sure we’ve seen that too often over the years. He’s one in a million.”

“The first time I asked Ross to take penalties he took four, two with each foot, and he scored them all.” Former Everton academy coach Ray Hall reveals why he’s so special.

In October 2010 Barkley suffered a double leg break in an England under-19 match. A Belgian doctor told him he would never play again. Less than three years later, aged 19, he made his debut for the senior team in a 4-0 World Cup qualifying win over Moldova.

BARKLEY’S 1 VS 1 DRILL
Set up Player A (in blue) stands at the top of the D, with coach A on the halfway line. Player B (in white) stands behind Player A. Coach B stands out on one of the wings.

Action Player A sprints 10 yards towards the halfway line and receives a pass from Coach A. Player B tracks him and applies passive pressure. Player A takes two touches and plays the ball back to Coach A. He then sprints towards Coach B, while Player B returns to the top of the D. Player A receives a pass from Coach B, turns on the ball and runs at Player B, who has come out to apply pressure. Player A must now try to beat Player B and get a shot on target.

Sets 4 (with a two-minute rest between sets)