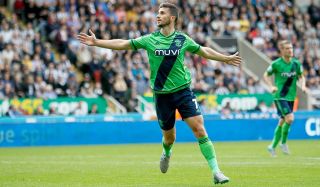 Be a constant nuisance
“When you’re playing upfront on your own, you have to try and stretch the opposition defence to create space for your advanced midfield player. Do this by making runs into the channels. It’s important you try and occupy both centre-backs by staying on the move and switching between them. When the defenders have the ball, pressure the player in possession and cut off the pass to the other centre-back. Then when they look to play it out to the byline, swamp them.”

Slip off the radar
“If you stand in front of a defender, you’re making their job easy. Instead, stand behind them and break back onside just as the ball is played. It’s testing for defenders because they don’t know where you are – they have to look away from the ball to find out exactly where you are. When I used to stand in front of defenders they could see everything, so before one game I thought, ‘Well, I’m going to do the same thing as them’. This tactic worked well for me in the last couple of seasons.”

Soak up the hits
“I’m weird – when I get smashed in a game it livens me up and eggs me on. I look forward to the physical battle in a sick kind of way. I wouldn’t look to get my own back on an opponent, but I know I need to put it about as much as I get it. If your marker keeps holding you, hold his hand there as long as possible and bring him down to the floor with you. Make sure the lino or referee can see what’s happened. Do this next time your opponent is preventing you from making the move you want and they probably won’t do it again.”

Shane Long's endurance workout
Run out of steam when you’re upfront on your own? Build lasting endurance with this drill from the Republic of Ireland striker

“Sprint for 40 metres, then walk for five metres, turn back and walk a further five metres before sprinting for 40 metres again. Count one length as one rep and repeat this six times. Push yourself to complete a minimum of four sets before resting.

“You get a short break in between each sprint, but this simple exercise replicates exactly what you would do in a proper game – a 40 metre sprint is the furthest you’ll ever run as a striker in a match.

“It’s just like making a run in behind the opposition defence. It’s very tiring and you’ll be gasping for air at the end of it, but this routine is very specific to the lone striker position.”

Recommended for you:
Radamel Falcao: How to be a penalty-box predator
Thierry Henry: Finishing at speed
Wayne Rooney's shooting drill
Olivier Giroud: How to create and conquer
Rooney: Big match preparation
Ibrahimovic: How to play as a targetman