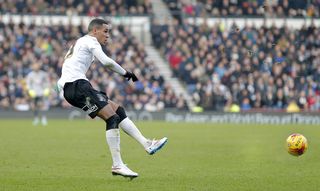 “I’m a winger for my team and I can finish, but I never seem to be in a position to score. What should I be doing to get more goals?”
Ryan Hambel, via Twitter

“As a winger it’s easy to become isolated out wide. The key is to take a gamble whenever the winger on the opposite side has the ball.

You have to be pro-active rather than reactive and think where the ball might end up so you can be on the end of it if a scoring opportunity comes up.

A lot of wide players don’t like heading the ball and I’ve only ever scored one header in my career, but it’s vital you get yourself into the box and don’t be afraid of a situation where you might get hurt.

In the past, wingers were often told to stand on the chalk and stay there until they got the ball, but in this day and age a lot of teams play with one striker upfront in a 4-3-3 formation. That means you need to be more flexible and sometimes play as a more central midfielder or even a striker.

Having some flexibility in your positioning is also important for a winger because football has changed a lot tactically in the last few years.”