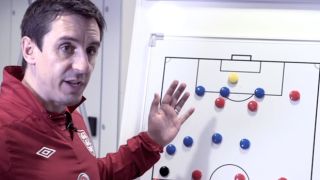 During his 19 years at Old Trafford Gary Neville played with some of the best widemen to have graced the Premier League: Kanchelskis, Beckham, Ronaldo and Valencia.

He couldn’t match these players for ability, but his tactical nous, intelligence and work ethic enabled him to form devastating partnerships with each.

Many weary legged opponents were left in Neville’s wake as his hurtled past his team-mate on the overlap and delivered a precise cross in to the box.

But it wasn’t just in the final third where these right-sided partnerships made a difference. They dovetailed effectively in the defensive third, shackling any threat from the channel.

Season after season, no matter who he was playing with, Neville found a way to make it work. FFT caught up with the England coach to find out how he combined so successfully with the man playing in front of him.

From switching play to create 2 v 1 situations to causing chaos with underlapping runs, Neville explains all in this video.

Neville was talking at an event for Vauxhall, the England sponsor. Keep up to date with news and comps at vauxhallfootball.co.uk, @VauxhallEngland andfacebook.com/VauxhallEngland