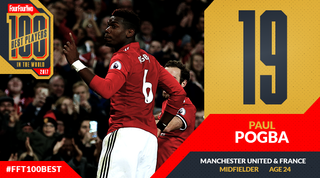 If a player’s worth is best gauged by how their side copes without them, then there are few more valuable footballers out there than Paul Pogba.

It's been over a year since Pogba ended up on the losing side in the Premier League (since defeat vs Chelsea on October 23, 2016). Manchester United have lost 5 of the 16 games that he has missed since

When he returned to the Manchester United side in mid-November after a six-week absence, it was as if a switch had been flipped. A side that had looked laboured and lacking in imagination suddenly sparkled with creativity and freedom, moving the ball from defence to attack with silky ingenuity.

Most of this was because Pogba was doing it, but not all: more telling than his clear on-the-ball majesty was the intangible effect he seemed to have on his team-mates – everyone raised their game in his presence. It's an aura of authority that has been lacking in the Old Trafford engine room since the days of Roy Keane.

Pogba is nothing like Keane, of course – he smirks, saunters and dances his way through games in a manner wholly alien to his midfield predecessor – but there’s more than one way to be a leader, and there is no doubt whatsoever that Pogba is now the beating heart of Jose Mourinho’s United side.

Still only 24, he possesses an almost insultingly complete skill set. Pogba is able to dribble, shoot and pass as well as any midfielder in the division, but allies such technique with an olympian’s physical capabilities, life-affirming exuberance and seemingly bulletproof self-confidence.

Manchester United have averaged 3.00 goals per match when Pogba has featured (24 in 8 games) and 1.44 when he hasn't (13 in 9 games) in the Premier League this season

If United are going to return to their perch any time soon, it will be Pogba dragging them back up there, grinning cheekily the whole way.

Highlight: A man-of-the-match outing in last season's Europa League final: the win over Ajax in Stockholm that underlined the Frenchman's growing importance to this United side, and added to the medal collection in his first season back at Old Trafford.