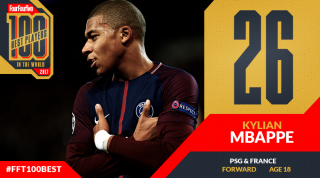 One football stats sage recently declared on Twitter that Kylian Mbappe is “the best teenager we’ve seen in the data era”. This is no time for another Proper Football Men vs Analytics Geeks debate – and in this case there’s no need anyway, as it's a statement with which all parties can surely agree.

Mbappe’s 2017 feats beggar belief. Twelve months ago, he’d made seven Ligue 1 starts for Monaco. A year on, he’s won the Golden Boy award – the annual gong for Europe’s best U21 footballer – and will become the world’s second-most expensive player when his season-long loan from Monaco to PSG is turned permanent next summer.

Seventeen goals and six assists in Ligue 1 is an impressive annual return. His Champions League achievements are jaw-dropping: Mbappe’s jet-heeled sprinting and laser-like one-on-one finishing helped him score five times as Monaco powered towards last season’s semi-finals, and he added a further four goals for PSG during this autumn's group stage.

It’s a tribute to Mbappe’s astonishing maturity that he’s taken everything literally and metaphorically in his stride all year long. He is often compared to fellow former Monaco youth academy graduate Thierry Henry, but the truth is that Mbappe is miles ahead of where Henry was at the same age.

The more we see of the boy from Bondy, the less hyperbolic it seems to suggest we’re looking at a player who may one day bear comparison with the three greats of French football: Kopa, Platini and Zidane.

Highlight: The sensational stepovers and skill that bamboozled experienced Ligue 1 defender Franck Beria to set up a goal for Monaco against Lille in May