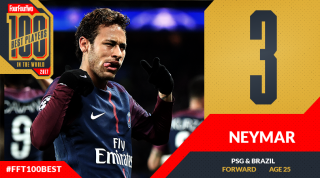 So, was he worth the outlay? It’s too early to say for sure whether the €222 million PSG forked out for the one-man brand and all-round footballing genius will turn out to be money well spent. Yet during his first four months in the French capital, Neymar has set about repaying the massive investment in him impressively.

He needs to stay put to make it work, of course. The occasional rumour that the snake-hipped superstar is already growing bored of la vie parisienne will cause serious turbulence on board the private jets of PSG’s decision-makers as they flit between France and Qatar. If Neymar’s in this for the long haul, however, it could prove a perfect fit.

Already the 25-year-old Brazilian has made PSG more watchable, more exciting and moved them a lot closer to their holy grail of lifting the Champions League for the first time in their history. Neymar has sprinkled stardust on a number of his new team's domestic and European performances since uprooting himself from Catalonia, and taken strides towards his personal goal of thriving outside of Lionel Messi’s shadow.

There’s been the odd brouhaha – his schoolyard spat with PSG team-mate Edinson Cavani over who takes the team’s penalties springs to mind – but such capriciousness comes as part of the Neymar package.

More instructive is the way PSG supporters’ steps have quickened en route to the Parc des Princes knowing Neymar will be on the teamsheet. If one of the main reasons we watch football is to dream that beautiful things can actually happen, some would argue that the delicious anticipation of seeing him in action has already made the Brazilian priceless.

Neymar spent half the year at Barcelona, of course, but it’s a tribute to how effortlessly he’s taken to his role as kingpin in the PSG project that those days already seem long ago now.

Despite his individualistic endeavours it’s worth noting that, having already played a part in one historically brilliant three-man forward line, he’s well on his way to being one-third of another. ‘MCN’ may not have quite the same ring as ‘MSN’, but his association with Cavani and Kylian Mbappe is wonderful to watch and may prove just as fruitful when measured in silverware over the next three years.

Neymar has 46 shot assists in Ligue 1 this season, 25 more than any other PSG player

On the matter of silverware, Neymar will ultimately be judged against whether PSG win the Champions League. The humiliation of last season’s 6-1 defeat and injury-time exit to Barcelona in the last 16 – when the 25-year-old delivered a man-of-the-match performance – was the catalyst for PSG's Qatari overlords to intensify their pursuits for him.

Thanks in no small part to Neymar, PSG have breezed through the 2017/18 group stages in magnificent style. Right now, Manchester City are the only team on the continent that can claim to play the game as bewitchingly.

With a World Cup in sight, the stage is set for 2018 to be even more rewarding for a player looking readier than ever to break the Ronaldo-Messi duopoly.