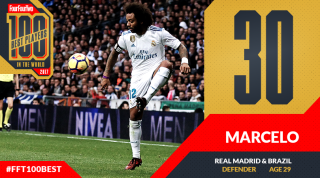 Marcelo was a key weapon in Real Madrid’s attacking arsenal during a highly successful 2016/17 campaign where los Blancos triumphed in both La Liga and the Champions League.

Marcelo managed 10 assists in the 2016/17 season, the most for a defender across Europe's big five leagues

The Brazilian’s creativity and desire to get forward help provide the width for a narrow midfield, and a stream of good service for the likes of Cristiano Ronaldo and Karim Benzema.

Simply, he is still the most complete left-back in world football, with neat trickery and an excellent left foot making him as impressive to watch as ever.

Marcelo's street football upbringing inspires some of the more unorthodox flicks and tricks, but this has been a year of consistency for the Brazil international. Last season the 29-year-old racked up 10 assists in La Liga, offering direct, no-frills deliveries guided into dangerous areas.

His occasional cameos as a left winger in La Liga show just how highly Zinedine Zidane thinks of his quality in the final third.