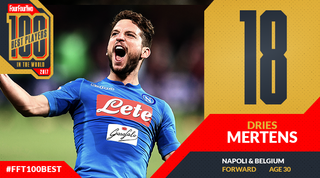 Inadvertently, Manolo Gabbiadini may become a Napoli hero yet. While things didn’t work out for the Southampton man during his stint at the San Paolo, that ill-fated spell as the club’s main striker last season led to a significant tactical experiment. With the hole left by Gonzalo Higuain’s departure still glaringly evident, Dries Mertens was stuck up front.

What followed was one of the quickest and most impressive individual adaptations in recent football history.

Mertens is one of three players to have reached double figures in Serie A for both goals and assists in 2017 (27 goals, 12 assists). His 39 goal contributions in that time lead the division

The Belgian, known previously as a nippy wideman to be brought on when Lorenzo Insigne wasn’t firing, started to score on an abnormally frequent basis. Many of the skills that had made him such a useful impact sub – speed, dribbling, constant movement – were allowing him to get in behind defences more regularly.

Ultimately, only Roma hitman Edin Dzeko bettered Mertens' 28-goal haul in Serie A last term – and both players complemented that tally with nine assists on top.

Mertens' achievements are made all the more remarkable when taking into account that he wasn’t initially entrusted with leading the line.

The 30-year-old is a late bloomer, but he doesn’t look like a one-season wonder. He’s already struck 12 goals this season in all competitions, and laid on another six assists for team-mates. Higuain’s departure for Juventus still hurts, but Napoli fans have a wonderful successor to cheer in his place.

Highlight: Mertens’ goal against Lazio in September was a moment of pure inspiration. Defied in a one-on-one by the opposition goalkeeper, he ran around the ball – which had been parried wide – before lobbing in a gorgeous curled effort.