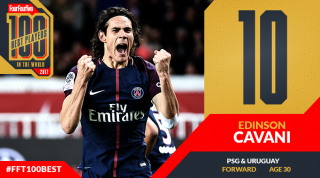 If there’s one Ligue 1 player who has every right to squint, cock his ear towards the once-baying masses and offer a sardonic: “You were saying?” in their general direction, it’s Edinson Cavani.

Written off as second-rate by some for supposedly missing too many chances, the Uruguay centre-forward has had the last laugh – and it’s been loud, long and vengeful. He was ridiculed for having square feet and an alleged habit of skewing sitters wide of the target, but the 30-year-old hit back by producing a year-long streak of dazzling form to emerge as PSG's single most important player of the post-Zlatan era (ahead even of Neymar, for now).

On November 4, Cavani became only the third player to score 100 or more goals in two of the big five European leagues (Ligue 1 and Serie A) over the last 20 years

His stats are astonishing. In 37 Ligue 1 matches, Cavani has scored 34 goals. In eight Champions League games, ‘El Matador’ has struck as many times. Throw in his domestic cup appearances and he’s scored 48 goals in all competitions at a rate of one every 83 minutes.

PSG may have missed out on the Ligue 1 title for the first time in five seasons but if anyone’s exempt from blame for that relative failure, it’s Cavani. His personal performances have been consistently and ruthlessly brilliant, and he still ends the year with an impressive collection of baubles: he’s the current Ligue 1 Player of the Year, Ligue 1 Golden Boot holder, has added a couple more domestic cup winners' medals to his collection and is a whisker away from overtaking ex-team-mate Ibrahimovic to become PSG’s all-time leading scorer.

Cavani turns 31 in February, yet his power and fitness levels are so impressive that you suspect he can continue performing at this standard for another three or four years. Having had to toil away as a wide attacker over several seasons in order to accommodate Ibrahimovic’s ego and talents, PSG's No.9 shirt is one he won’t give up easily.

There’s no one on the market who can hold a candle to him, anyway – and if he does miss the occasional sitter, so what? Given how many goals he does actually score, if anything he deserves credit for getting into scoring positions as frequently as he does. He’s also one of the few strikers playing today who boasts a trademark finish – the Cavani near-post header is a thing of brutal beauty.

For all the Uruguay international’s achievements to date, his future looks even brighter. PSG are closer to winning the Champions League than they’ve been at any other point during his time at the club. The arrivals of Neymar and Mbappe as his wingmen have not only set up the club for continental success but also killed off Monaco’s flickering challenge for domestic supremacy.

Then there’s the small matter of next summer’s World Cup in Russia. Cavani will be confident of filling his boots against the host nation, Egypt and Saudi Arabia in the group stages. Are we looking at a future World Cup Golden Boot winner? Given the shape Cavani’s in, don’t bet against it.