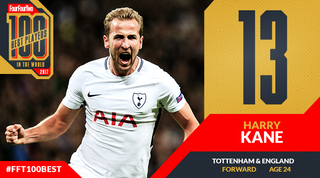 The year when the debate truly finished. By the end of last season, Kane had won his second successive Golden Boot, been voted into the PFA’s Premier League Team of the Year for the third season running, and scored 29 league goals from just 30 appearances.

Not a one, a two or a three-season wonder, but just an outstanding player with the broadest skill set of any English centre-forward in a generation.

Even today, though, Kane continues to be judged by a fluid criteria. When he started scoring Europa League goals, there were those who insisted that wasn’t built for the Premier League. When he began to consistently feast on domestic defences, the Champions League was presumed to be a level too high.

And on and on. But then, this is what makes Kane the player he is. The louder the chorus shouting him down and the more references that are made to his clunky, unorthodox style, the more defiant he is - and, ultimately, the quicker he evolves in response.

Mauricio Pochettino warrants recognition for creating the system which equips Kane, but the body of work itself is the product of a player with a semi-maniacal capacity for self-improvement.

That’s what 2017 has been: the same, but better. More lethal, more athletic and more of a problem for opponents in every phase of the attack.

Highlight: Eleven goals in six games during September, and captaining England for the first time at the beginning of October. No player is better suited to lead them.