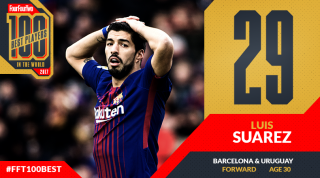 Luis Suarez followed a curious pattern in the first half of 2017. At one point he struck in six games in a row – then drew blank in four of the next five. Next came a goalscoring run of five games, followed by a drought lasting just as long. He left on a high note, hitting five goals in his last four outings.

Those efforts only yielded a Spanish Cup in a disappointing season, but at least Suarez was scoring regularly. That much cannot be said this season. The Uruguayan is usually so clinical, but has mustered just seven goals in 18 appearances in La Liga and the Champions League – all while being fed by Lionel Messi, the most incisive passer in the game.

Suarez has averaged 6.1 penalty area touches this season, the highest in La Liga

A ‘normal’ striker would be content to score once every two games, but this is Suarez. The good news for Barça is that they’re top of La Liga with a striker suffering one of the worst slumps of his career. Imagine their firepower when he eventually recovers.

Highlight: In October, the Uruguayan fired home a late equaliser at Atletico Madrid to maintain Barcelona’s unbeaten start to the season.