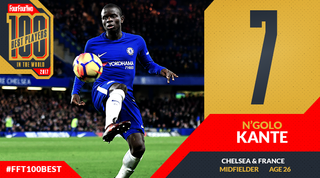 That N'Golo Kante this year became the first player since Eric Cantona to win successive league titles in England with different clubs is not mere coincidence. He may be a midfield destroyer rather than a fiery playmaker, but much like his countryman two-and-a-half decades earlier, Kante is a player whose mere presence imbues an entire team with drive, cunning and unstinting mental resilience.

Of course, to label Kante as a midfield destroyer is to do grave injustice to a footballer with perhaps the most complete skill set since peak-era Roy Keane. But that isn’t to say his talents as a holding player are anything short of staggering: the Frenchman allies a superhuman lung capacity with a reading of the game that borders on the professorial.

Note how many times he recovers possession, and how few of those are done via a sliding tackle – like Claude Makelele, he has an uncanny ability to spot an opponent’s pass just before it’s made and snuff it out accordingly. But whereas his Chelsea predecessor had to develop those street-smarts because he lacked athleticism, Kante has the best of both worlds; he possesses an explosive accelerator pedal that lets him surge ahead of opponents and win challenges he has seemingly no right to contest.

At Leicester, Kante was tasked with extinguishing danger and driving the Foxes forward. Since moving to Chelsea he has been granted the platform to exhibit the technical class that was only ever hinted at within the recover-and-recycle remit he was given at the King Power Stadium.

Under Antonio Conte the midfielder has wilfully entered the final third, often with the ball at his feet, and his passing range has become smarter, subtler and more incisive. This season, when fielded alongside Tiemoue Bakayoko, it has been Kante who has been entrusted with the more adventurous role.

That the frequency with which he makes tackles, fouls, interceptions and clearances have all decreased slightly since last season – as has his pass-completion rate – may on the face of it seem like regression. In fact, it is simply evidence of looser shackles: the number of key passes he is playing has more than doubled.

Yet despite being given additional attacking duties, Kante remains the most vital component of Chelsea’s defence. With him in the side this term, the Blues have conceded nine in 15, winning 11; during his six-game absence in late-autumn they let in 11 and won just three.

In the tribalist and wildly opinionated world of the Premier League, there are very few things that players, pundits and fans and agree on. It is telling, then, that a consensus was reached this summer when each party decided on the best of the division’s 500 or so players: Kante collected the Players' Player of the Year, the PFA Premier League Player of the Season and the Football Writers’ Footballer of the Year.

It was ample reward for a man who – if he isn’t there already – is galloping tirelessly down the path to footballing greatness.