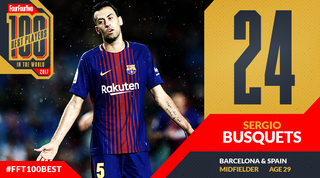 He may no longer have Xavi by his side, and Andres Iniesta is on the decline, but Sergio Busquets remains as key as ever at Barcelona.

If anything he's picked up the baton dropped by those two players, and at times holds up Barça’s fabled passing values on his own. Every midfielder in La Masia can look up to Busquets as an example to follow, and he is a player now firmly among the club's all-time greats.

Busquets has averaged a team-high 78.0 passes per 90 minutes for Barcelona this season, the fourth-highest in La Liga

Barça are a different team altogether when Busquets isn't around, so much so that they seem obviously more vulnerable and lost, lacking clarity both defensively and when attacking. He provides security for the defenders behind him but is also a key asset when moving forward out of defence. His ability on the ball is exemplary, and few read the game better while making such consistently intelligent decisions.

The more you watch Busquets up close, the more you see his value and influence in the team. He doesn't crave the headlines, nor is he busy on social media – and in some regards maybe this goes against him in terms of achieving more attention.

While Barcelona handed over their La Liga and Champions League crowns to great rivals Real Madrid, Busquets was among a small number of players who came away unscathed and with his reputations intact. He had to put out more fires than before, and at times seemed hung out to dry in Barça's chaotic system. He persevered, though, and can look back on the year with pride.

When he does eventually retire, only maybe then will the neutral truly realise his value and influence.

Highlight: A double achievement for Busquets as he became the seventh-highest appearance-maker in Barcelona history, then later hit 100 caps for Spain (only the 12th player to do so).