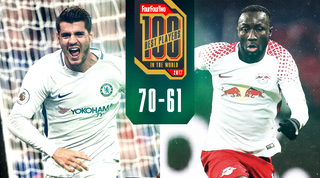 Sadio Mane has contributed to 15 goals in 17 Premier League starts at Anfield since the beginning of last season (11 goals, 4 assists)

2017 wasn't perfect for the Senegalese star by any means. The year started with a loss to Cameroon in the quarter-finals of the Africa Cup of Nations. Then the 25-year-old missed the crucial last weeks of 2016/17 with knee injury, and his start to the new season was marred by that infamous red card for a high challenge on Manchester City goalkeeper Ederson as Liverpool were thumped 5-0.

And yet, more notably, Mane also made some dazzling contributions for club and country and is easily now among the Premier League's most watchable players thanks to his speed and trickery. Senegal have qualified for only their second World Cup in history, while Mane was on target in Liverpool's biggest matches at Anfield this year, endearing him to Reds' fans everywhere.

Highlight: Mane was magnificent in home wins against Everton and Arsenal (twice), but his finest performance came when he scored twice in three minutes in April's 2-0 win over Tottenham.

David Alaba has averaged 21.5 final-third passes per 90 minutes this season, the highest average among Bundesliga defenders

Alaba was perhaps the best left-back in world football when Bayern Munich won the Treble, but he's since struggled. A combination of injuries, new positions and different head coaches have meant the now-25-year-old hasn't quite developed as many expected.

But there's a reason the Austrian is closing in on 300 appearances for Bayern: his ability to get to the byline and deliver is still there, as is the burst of speed and occasional threat from set-pieces.

His interplay with Franck Ribery is outstanding, and Bayern will have to transfer that to the post-Frenchman era if they want Alaba to get back to his best.

Highlight: Since the return of Jupp Heynckes, Alaba's form has notably improved. Against Borussia Dortmund on Matchday 11, there were plenty of signs that the player of old was returning.

Jan Vertonghen leads Tottenham with 32 tackles and 123 clearances in the Premier League this season. Only Kieran Tripper (30) has made more blocks than the Belgian (29)

A year of real growth. Reputationally, Vertonghen is still the little brother to Toby Alderweireld at Tottenham and needs his countryman alongside him to produce his best, but 2017 has certainly seem him develop into a more stable, less impulsive defender.

That being said, the last 12 months have also offered a reminder of what a fine footballing defender he’s capable of being. He carries the ball elegantly and his first-phase passing into midfield has often been exemplary; many a Spurs move starts at his feet.

Highlight: Winning his 97th cap for Belgium in October against Cyprus and becoming his country’s record appearance-maker. Now on 98 caps, an international century awaits him in the new year.

Alba was the only defender to record at least 6 assists in both the 2015/16 and 2016/17 seasons across Europe's five major leagues. He already has 5 assists this season

Alba has contributed 17 assists for Barcelona in La Liga since the start of the 2015/16 season, but his overlapping bursts down the left have proved one of the Catalans' calling cards for almost a decade. While coaches have changed, his approach hasn't, and his pace and timing are key when getting to the byline.

After falling out of favour in the later stages of Luis Enrique’s reign at the Camp Nou – mainly due to a 3-4-3 formation which meant he spent time on the bench – the arrival of Ernesto Valverde and sale of Neymar have helped Alba claim back the left-hand side. When used in combination with Andres Iniesta, they make a formidable blend of cunning and athleticism.

Highlight: A swashbuckling performance against Espanyol in September, where he picked up two assists and proved that he will be key under Valverde.

Since Alderweireld joined Tottenham in 2015, Spurs have won 60.3% of the Premier League matches that he has started and only 42.9% of the games without him in their starting XI

Perhaps the easiest way of quantifying Alderweireld’s worth in 2017 is to look back on what Tottenham were without him. In late 2017, a hamstring injury forced him out of Mauricio Pochettino’s line-up and, predictably, the defence melted.

Alderweireld has a clear technical worth - he’s probably the finest long-range passing defender in the league, and is outstanding both on the floor and in the air - but he brings intangibles to his side which they dare not be without. He is an organiser and a leader. That package continues to make him the finest centre-back in the country.

Highlight: Standing firm in the Bernabeu during Tottenham’s 1-1 draw with Real Madrid. Playing inside makeshift full-back Jan Vertonghen and behind a central midfield of Harry Winks and Moussa Sissoko, Alderweireld was the tough elastic which allowed the visitors to bend without breaking.

Sane already has more goals (6) and assists (6) in 15 Premier League appearances this season than he managed in 26 games last season (5 goals, 3 assists)

The 21-year-old German didn't have an easy start to his Manchester City career following a high-profile €50 million transfer from Schalke in the summer of 2016, and some pundits doubted his ability to reach the levels required of Premier League players.

Sane has since proved critics wrong, improving throughout 2017, and the winger's start to the 2017/18 season has been nothing short of sensational. One of the major reasons behind his success has been the system change – Pep Guardiola's stable 4-3-3 formation suits the speedy youngster perfectly, and his confidence has grown significantly.

Sane bagged six goals and provided six assists in his first 13 Premier League matches this season, and excelled in the Champions League too.

Highlight: Setting up John Stones and Sergio Aguero in the 4-2 triumph at Napoli was an impressive achievement for a man who thrives in big matches.

The 22 year-old’s performances in 2017 have been near exemplary. While too many cautions and red cards have raised questions about his temperament, the sheer level of all-round quality Keita brings to Leipzig's midfield is worth the occasional lapse.

The Guinean enforcer is a strong, direct dribbler who can run a midfield with sharp transitional play, goals and accurate passing; the V12 engine every team wants. His future club Liverpool will be salivating.

Bundesliga viewers should savour the last six months of seeing one of Europe's most complete midfielders. Keita is in the running for – and probably most deserving of – the African Player of the Year award, and his 2018 looks like it could be even better.

Highlight: In his debut European season, Keita's performances in the Champions League were astounding. He seamlessly adjusted to the top level of club football - and his performance in the 3-2 home win against Porto was simply majestic.

Alves is less dominant now than he was in his Barcelona prime, but was still a Serie A title winner and Champions League finalist for Juventus in 2017 before embarking on the latest chapter of his glittering career at PSG in the summer.

The excellent form of his right-back understudy, the Belgium international Thomas Meunier, means the 34-year-old can be rested these days without the team being unduly affected.

For the big matches, however, Alves is one of the first names on Unai Emery’s teamsheet and his strong bond with the other Brazilians in PSG’s camp – notably star man Neymar – means he’s already an important, as well as highly respected, figure in the Parc des Princes dressing room.

Highlight: Picking up a seventh league title of his career (and first away from Barcelona) with Juventus in May.

Jorginho has averaged 113 attempted passes per 90 minutes in Serie A this season; no other player has averaged more than 100

While the likes of Lorenzo Insigne and Dries Mertens grab the headlines, Jorginho is the beating heart of this stylish Napoli team that have become a must-watch.

When Pep Guardiola says a team is “perhaps the best I’ve faced in my career,” people tend to take note, and the Manchester City boss will surely recognise some of himself in their Brazil-born midfielder.

The 25-year-old has made more passes than any player in Europe’s top five leagues in each of the past two seasons, and tops the charts once again this term with 102 per 90 minutes. Jorginho seems to constantly find space and time where others cannot, and possesses the vision to open up Italy’s notoriously tight defences.

Highlight: A long overdue debut for the Italian national team ended in failure as the Azzurri lost their World Cup play-off to Sweden, but hearing Guardiola say “Jorginho is wonderful” would surely be a close second.

For a long time, Morata seemed destined to add Manchester United to his big club resume, but a transfer never materialised and Real Madrid eventually sold the forward to Chelsea. To date, it hasn’t been a conclusive success.

Morata lacks the genetics to mimic Diego Costa and will never be that kind of rough-housing all-rounder. The Spaniard is obviously a very fine player - and outstanding in the air - but as summer has turned to winter his game has remained slightly short of precision.

There’s plenty of time to change that, of course, but there’s lingering uncertainty about whether he can really carry the load as a starting forward. Still, nine goals in his first 15 Premier League games is no bad going.

Highlight: The towering header against Manchester United at Stamford Bridge in November. One goal does not make a Premier League career, but putting his name to such an important game certainly felt like the start of something.