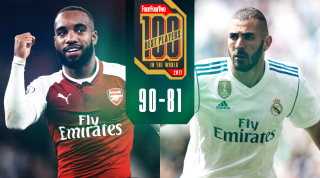 Donnarumma is the youngest goalkeeper in Serie A history (16 years, 8 months), having debuted on October 25, 2015 against Sassuolo. He's started all 84 Serie A matches since

As he closes in on a century of appearances for Milan, it’s hard to believe that Donnarumma is still only 18. Having made his debut for the club in 2015/16, aged 16, he’s since established himself as the true heir to Gianluigi Buffon’s goalkeeping throne.

Of course, 2017 hasn’t all been plain sailing. He took his time before extending his contract with the Rossoneri, enraging supporters as he flirted with the idea of a move away. He has also looked shaky at times, most notably when conceding having failed to control a backpass against Pescara in April.

Despite all of that, Donnarumma remains integral to Milan and Italy. His youth may lead some to see him as an exceptional prospect, but in truth he has already surpassed that status thanks to a plethora of game-changing performances.

Highlight: In March, the teenager made his first start for Italy in a friendly against Holland. In doing so, he became the youngest goalkeeper ever to start for his country.

At his best, the Frenchman greases the wheels of Real Madrid's attack and creates space for Cristiano Ronaldo. At his worst, he’s passive and wasteful.

Sadly for him, the latter version has appeared more often than the former this year. Benzema has hit just 12 goals in 39 games in La Liga and the Champions League and, while few fans minded his modest record when Madrid won the Double, glaring misses have since proved more costly. He has recorded just seven assists all year.

It hasn’t helped that Alvaro Morata and Mariano, the strikers who Madrid sold in summer, have been scoring for fun. Yet even as his own fans have whistled him, Benzema has retained the support of the club, who gave him a new four-year-deal in September.

Highlight: In May, Benzema skipped past three Atletico Madrid players near the touchline to set up a crucial away goal in the Champions League semi-finals.

Muller carved out 12 Bundesliga assists in 2016/17, his highest single-season total in the competition

It’s arguably been Thomas Muller's most challenging year as a Bayern Munich player. The goals haven't flowed at the same rate, and the “space investigator” tag doesn't seem to quite have the same ring as it did before.

Across most of the current campaign, Muller hasn't really pushed Robert Lewandowski for the No.9 shirt. The Germany international's goal drought wasn't as painful as his 1,000-minute wait for a goal in 2016, but it still hurt. He netted only four in the second half of last season and has managed a solitary strike this term.

The 28-year-old isn't so much going through a drought, but an identity crisis at Bayern Munich. Does he still matter to them? The time may come for the German champions to push for an innovative manager – a Pep Guardiola type – and it remains to be seen how Muller can sustain his career at the top level should that happen. One saving grace, though (at least for now): Joachim Low still entrusts him as a key component of his Germany side.

Highlight: In Manuel Neuer's recent absence, Muller has been given the honour of captaining the side – certainly another ambition fulfilled for the local-boy-made-good.

Since arriving at Barcelona from Sevilla in 2014, Rakitic has accepted the fact that he will no longer be the force that could single-handedly drive his team to victory. And yet, the same hard work and determination that he put into his captaincy in Andalusia has helped the sacrifices he has been willing to make at Camp Nou.

The Croatian is often asked to do some hard running in midfield, but still has the footballing brain to cover spaces intelligently, and the technical ability to help Barça retain possession or release their marauding full-backs out wide. Since the appointment of Ernesto Valverde as boss, Rakitic has turned into a dependable general in the Catalans’ midfield.

Highlight: Playing in all of Barça’s first 20 matches of 2017/2018 – only the second player at the club to manage that feat in the last five years.

Fabregas has played more Premier League games than any other Spanish player (327), having managed his 300th match (212 apps with Arsenal) in February

A Premier League champion in May and Chelsea’s most creative operative during Antonio Conte’s first season, desspite barely starting a third of their games. Fabregas spent most of the early part of the year providing invention from the bench; a third wheel to the highly successful N’Golo Kante-Nemanja Matic partnership.

Six months on, and with Matic now wearing Manchester United red (and Tiemoue Bakayoko not yet convincing on either side of the ball), Fabregas is as important as ever. He has never been the quickest player, nor the most combative, but he retains a knifing passing range that still challenges defenders the length and breadth of the country.

Highlight: His second Premier League title in May. A peripheral figure in one sense, but utterly invaluable in another: a team-leading 12 assists made him by far the most valuable auxiliary option in the league.

Without doubt one of the most important figures of Diego Simeone's era at Atletico Madrid, the Brazilian left-back has been a consistently strong presence for a number of years. His last year or so has been outstanding, with Luis even more vital than ever before.

His gallops into midfield and the support he provides to Atleti's attack make him vital. Luis's ability on the ball is like that of a midfielder, and he's able to offer quality in attack that serves the likes of Antoine Griezmann & Co. especially well.

Without the presence of a natural creative midfielder, it's vital that Atleti use another outlet to produce chances. Luis is particularly excellent at running with the ball and moving Simeone's men up the pitch.

Highlight: A goal and assist against Osasuna to confirm he was in the best form of his career for Atleti.

Behind Gianluigi Buffon, Handanovic has been Serie A's most consistent goalkeeper in recent years. The Inter Milan shot-stopper is a commanding presence and, at 33 years of age, seems to get better with each passing season.

In 2017/18 he has added another string to his bow. Luciano Spalletti’s appointment as head coach has coincided with the Nerazzurri implementing more patient build-up from the back – and while Handanovic is no Manuel Neuer, he has evinced calmness in possession to help ease his team into their new style.

The Slovenian retired from international football in 2015 as Jan Oblak overtook him in the pecking order, but he has only gone from strength to strength since and his efforts were recently rewarded with an extended contract that means he will stay at Inter until 2021.

Highlight: Away to title rivals Napoli, Handanovic pulled off a superb double save, denying Jose Callejon before keeping out Dries Mertens’ follow-up with his feet. David de Gea would have been proud of such quick reactions.

Dele Alli has scored 21 Premier League goals since the start of last season, more than any other midfielder

Tottenham’s in-house nutmeg connoisseur has had a slightly odd season so far, punctuating what has, by his standards, been a rather indifferent period of form. There have been just enough performances of crackling brilliance to remind us that Alli is still very much his country’s most exuberant, fearless and technically dazzling player – or in other words, England’s least English footballer.

While a quiet early winter reflected his team’s rocky patch, the rest of the year has largely been one continuous upswing, starting amid a vivid purple patch of seven goals in four games and went on to include another 18, including in wins against Liverpool, Chelsea, Arsenal and, of course, Real Madrid.

Added to that have been a handful of eye-catching outings in a deeper-lying midfield position to go alongside his growing mastery of the playmaker-cum-second-striker role.

Highlight: That show-stopping performance when Madrid came to town. It wasn’t so much his two goals (that should really have become a hat-trick), but the way his movement, finesse and quick thinking completely bamboozled the reigning European champions. On a pitch that included Luka Modric, Toni Kroos and Isco, it was Alli who dictated the game: both the pattern of play and the final score.

Fekir has finally fully recovered from the knee injury that ruled him out for virtually the entirety of 2015/16, and is starting to fulfil the talent that could turn him into one of the world’s very best footballers.

Yes, that’s how good he could be – and he’s showing it almost weekly for Lyon right now. Having played at half-pace upon his return from injury last season, the 24-year-old is now performing at top speed without fear, and appears to have matured too having been named Lyon captain.

Fekir, a compelling dribbler who buzzes about the pitch, is already into double figures for Ligue 1 goals this season. At this rate he will surely be one of the continent’s most coveted players on next summer’s transfer market.

Highlight: The truly stunning right-foot strike (that’s his weaker foot, folks) from inside his own half to score against Bordeaux in August.

Lacazette scored his 100th Ligue 1 goal for Lyon in his final appearance with the club before joining Arsenal, becoming the fourth player to reach that milestone for OL

It was tough for the 26-year-old to leave his beloved Lyon, and he stayed at the club longer than anyone had expected – but in the end there was no option but to move forward.

The striker finished second in the Ligue 1 scoring charts behind Edinson Cavani, with 28 goals to his name, and then became Arsenal's most expensive signing in history when Arsene Wenger agreed to pay at least €53 million for his services.

It soon looked like a shrewd move: Lacazette scored two minutes into his Premier League debut in the 4-3 win over Leicester, and had taken to life in England remarkably well with seven goals in the first 14 matches and decent overall contributions.

The Frenchman is a precocious talent, able to play as a pure No.9 despite his lack of height, and has even managed to finally break into the national team, having started once in the World Cup qualifiers. There’s more to follow, we’d wager.

Highlight: Scoring twice on his farewell game for Lyon, which – quite symbolically – ended with the team conceding an injury-time equaliser in a 3-3 draw against Nice.