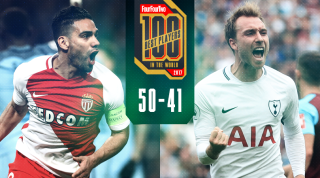 Only two players have contributed to more goals than Romelu Lukaku (12 - 8 scored, 4 assisted) in the Premier League this season

There was definitely a ‘before and after’ for Lukaku in 2017, as he made plain his intention to leave Everton long before the transfer window actually opened. From a public relations perspective, it wasn’t his finest moment.

A £70m transfer followed, and Manchester United beckoned. Lukaku is a naturally divisive player who will likely be argued over until the end of his career; as such, he not only had to start well at Old Trafford, but also needed to develop as a footballer and become more than just a goalscorer.

That he has done: his work-rate is up, his impact in the build-up is much more apparent than it ever has been, and the 24-year-old's famous appetite for self-improvement is paying dividends. One problem: the goals. At the time of writing Lukaku has managed just two in 14 games for United.

Eriksen has 146 shot assists in the Premier League since the start of last season, including 48 to Harry Kane alone

In what has certainly been the most consistent year of his career, Eriksen has elevated himself beyond all but a handful of Premier League midfielders and become Mauricio Pochettino’s most valuable creative piece.

As 2017 has progressed, it’s also become more obvious that Tottenham rise and fall with his output: as long as he has attacking life, so do they.

Beyond the glare of the Premier League, he has also produced an outstanding international year. Between June and October, Eriksen scored in six straight games for Denmark (five of which were part of the Russia 2018 qualifying tournament) and that effort culminated in an incendiary hat-trick in Dublin to secure a place in the finals.

Highlights: That November night in Dublin: three splendid goals to take his country to the World Cup.

Insigne has averaged 32.7 final-third passes per 90 minutes this season, the highest in Serie A

After his outstanding performances over the past few years, there should be no doubt that the Napoli winger is the most talented Italian forward of his generation. Criminally overlooked by former national team boss Gian Piero Ventura, the 26-year-old has been simply unstoppable for his hometown club.

Insigne is small, quick and has a seemingly endless bag of tricks; his play is eerily reminiscent of a young Alessandro Del Piero as he cuts in from the left flank to devastating effect.

Insigne has registered double figures for both goals and assists in each of the last two seasons, has already scored seven times this term and laid on four more for his team-mates. Talk of handing him the No.10 shirt retired in honour of Diego Maradona shows how beloved he is at the Stadio San Paolo.

Highlight: His brilliant long-range strike against Real Madrid that gave Napoli hope of recording a shock win at the Bernabeu.

Bayern's outstanding No.1 has perhaps felt the brunt of his club's malaise more than others. The 31-year-old performed impressively when called upon under Carlo Ancelotti, but the problem for Neuer is that he's spent more time than ever on the treatment table.

The keeper's foot injury kept him out of the tail end of the Bundesliga season and Champions League latter rounds, although the damage was already done against Real Madrid. Even though he was named captain, Neuer's time on the pitch lasted only until September. The German net-minder will likely be out of action until the turn of the New Year: fitness remains his only barrier to greatness and a much higher place on this list.

2017 has been an incredible renaissance year for Falcao. He looked washed up during those two lost, confusing seasons when he floundered around the Premier League at Chelsea and Manchester United, but he’s returned to form in remarkable fashion over the past 12 months.

The Colombia marksman was a key member of the Monaco side that defied the odds to wrestle the Ligue 1 title from PSG’s grip last May and also reached the Champions League semi-finals.

Falcao’s scoring form has been sensational on both sides of the summer recess: he’s netted 24 goals in Ligue 1, adding a further five in the Champions League.

Highlight: The way he barged John Stones off the ball before delivering the most delicate of chipped finishes in Monaco’s last-16 clash against Manchester City last February. It signalled his return to the top table of European football.

Hummels has won 166 aerial challenges since the start of last season, the second-most in the Bundesliga over this period

In the absence of Manuel Neuer and Jerome Boateng at various points of the season, Hummels has given Bayern a certain consistency at the back. Whether he's next to Niklas Sule, Boateng or Javi Martinez, the stopper has become an integral Bayern fixture since returning to the club from Borussia Dortmund a year ago.

In the Bundesliga he's been Mr Consistent, but Hummels' injury around the Real Madrid fixture in April may have swung the tie in favour of the Spaniards.

The Germany international, World Cup winner in 2014, missed the first leg at home, and despite his lack of fitness was thrown in for the return leg, which Bayern lost. The rush to get Hummels into the side half-fit shows how important he became to Carlo Ancelotti last term.

Highlight: Hummels wore the Germany captain's armband for the first time in his career during the 0-0 draw against England at Wembley.

Koulibaly has completed 92.9% of his passes this season, the second-highest accuracy in Serie A

Having impressed for the past two seasons, the imposing Senegalese defender was strongly linked with a summer move to Chelsea or Liverpool, yet opted to remain in Italy.

Why? According to his agent, it’s because the Napoli squad made a pact to stay together and win the Serie A title. “He knows that with these team-mates... they can try to win the Scudetto,” his representative Bruno Satin said in a radio interview. Early indications suggest he may well be right.

The Partenopei sit top of the table and look like serious contenders, but while their slick passing and attacking prowess catch widespread attention, the biggest improvement has come at the back. That they boast the league’s best defence is due in no small part to the presence of Koulibaly, a robust man-marker who opposing forwards rarely get the better of.

Highlight: Marshalling former team-mate Gonzalo Higuain perfectly in a 1-1 draw at the San Paolo back in April made the 26-year-old even more popular with Napoli fans.

Iniesta won his 30th trophy with Barcelona in 2017

Unfortunately the decline has begun to set in for Iniesta, but his incredible ability means he can still play at a high level for Barcelona.

Perhaps not being man-managed and preserved properly has gone against him in recent years. When he should've been resting, he has unfortunately been caught up in an unsteady Barca transition.

Still, Iniesta can often produce a throwback performance and pick apart opposition defence, allowing Barça and Spain to break down the most stubborn teams. He is a legend for both club and country, and is showing there is still life in him yet. The legs may be more weary, but his vision of the game and class are as apparent as ever.

Highlight: Signing a new contract with the club and confirming he will see out the rest of his playing career in Barça colours.

Robben retired from international duty in October; only three players have scored more goals than Robben's 37 for the Oranje

Though consistently one of European football's top attackers in recent years, Robben freely admits his time at Bayern Munich could be coming to an end. With his contract up in 2018, the Dutchman's performances have fallen similarly on a downward path.

Bayern's 2017 has been somewhat bleak with only the Bundesliga – Robben's sixth – to show for their efforts under Ancelotti. Still, when it came to the crunch, the talismanic winger delivered decent displays. Bayern beat Dortmund and closest rivals Leipzig in 2017, and for the national team he carried the can on his own towards the tail end of World Cup qualification.

However, as the Dutch national team's disappointments mirrored those in Munich, Robben - who turns 34 in January - fell just short.

Highlight: His end-of-season form in 2016/17 was vintage Robben, when he contributed to nine goals in five games.

Ter Stegen has saved 82.5% of the shots he's faced in La Liga this season, the third-highest percentage in the competition

After some high-profile mistakes early in his Barcelona career, 2017 has been the year in which Ter Stegen has transformed into one of the most consistent goalkeepers in Europe. There is usually a sense of sacrifice when a goalkeeper is good with his feet, but in the Germany international’s case, he doesn’t have any glaring gaps in his skill set.

Calm and comfortable in possession, and exceptionally quick and alert to come off his line, Ter Stegen is a terrific sweeper-keeper when required. On top of that, his shot-stopping is excellent and he can hold his own when commanding his area.

The 25-year-old is the perfect blueprint of a modern goalkeeper, and it only stands to reason that he will continue to improve as he matures.

Highlight: A terrific performance during Barcelona’s 1-1 draw with Atletico Madrid in October