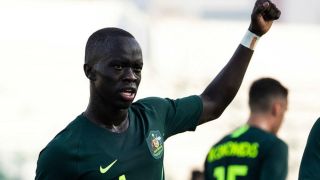 Australia warmed up for the start of their Asian Cup campaign with a comfortable 5-0 win over Oman.

Graham Arnold's men will begin their bid to defend the title on January 6 when they face Jordan and they made light work of vastly inferior opposition in Dubai as goalkeeper Mat Ryan celebrated his 50th cap with an easy victory.

Three goals in the opening 23 minutes put the result beyond doubt. Chris Ikonomidis netted his first international goal either side of efforts from Andrew Nabbout and Awer Mabil.

Milos Degenek added further gloss to the scoreline in the second half with his maiden international goal, before Jackson Irvine completed the rout late on.

Nabbout broke the deadlock in the 10th minute when he capitalised on the first of many mistakes in the Oman defence to slide home from close range.

Four minutes later it was 2-0 as Ikonomidis fired a half-volley in off the post and Mabil soon added the Socceroos' third when he prodded home after a seemingly innocuous Aziz Behich cross was allowed to find its way into his path.

Mabil went close to doubling his tally in the second half as his powerful free-kick was tipped over the crossbar by Faiyz Al Rashidi, but from the resulting corner Degenek opened his Australia account with a bizarre looping finish at the near post.

Australia took their foot off the gas somewhat thereafter, though Irvine emphatically volleyed home late on, and will hope for similarly serene victories in Group B, which also features Syria and Palestine.

What does it mean? Socceroos display gap in quality

Oman may have seen this game as a test of where they are as they attempt to progress from a tough Group F in which they will face Japan, Uzbekistan and Turkmenistan, and it served as emphatic evidence they are a long way adrift of side's of Australia's quality. The Socceroos will likely have to wait until the knockout rounds to receive a real test of their abilities.

Ikonomidis proves his worth

Ikonomidis has been largely kept in the international wilderness so far in his career, but earned his call-up for the tournament with some excellent form for Perth Glory and delivered an example of his finishing prowess with a well-taken goal.

It will be a miserable tournament for Oman if they do not improve defensively, their backline making it far too easy for Australia in the first half.

Australia face Jordan in their group opener in Al Ain, while Oman face Thailand in another friendly on January 1 ahead of their first tournament match with Uzbekistan on eight days later in Sharjah.