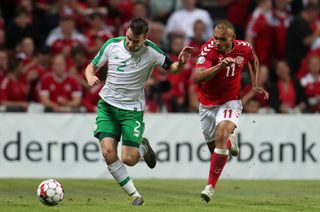 Seamus Coleman has urged the Republic of Ireland to use the memory of their fright in Gibraltar as they attempt to remain firmly in the hunt for Euro 2020 qualification.

When Group D was drawn, Ireland could have been forgiven for effectively banking six points against the minnows in advance having coasted to 7-0 and 4-0 victories respectively over them in their only two previous encounters.

However, Mick McCarthy’s men survived a major scare in his first game back at the helm in March when, amid a howling gale on the artificial pitch at the Victoria Stadium, they were made to fight tooth and nail for a 1-0 victory in the shadow of the Rock.

As they prepare to welcome Julio Ribas’ side to the Aviva Stadium on Monday evening, Coleman admitted: “It was one we wanted to forget about as quickly as possible.

“We got the three points, which was what we wanted. Everybody expected us to win by more, but ask any of the players – the wind was crazy and all over the place. It was their first game at home too, which made it more difficult. They were right up for it.

“It was a tough night and a great save by Daz [Randolph] kept us in it, so we have to prepare the same again. At international level, there are no easy games and we have to make sure we are fully prepared to get all three points tomorrow.”

McCarthy’s men go into the game having returned from Denmark on Friday with a precious point secured by Shane Duffy’s late header.

Ireland demonstrated their famed resilience once more in Copenhagen, but rode their luck at times to frustrate the Danes again, although they will be expected to make much more of the running in Dublin against a Gibraltar side which lost 3-0 in Georgia on the same evening.

That said, a victory which would leave them on 10 points after four games is the manager’s only focus, and he insists the draw at the Telia Parken Stadium will count for little if they do not get the win.

McCarthy said: “I told you I would have taken a draw, but we didn’t go and settle for a draw, we weren’t looking for that.

“We went looking for a win and we have to back that up with a win tomorrow. We’re at home.”

McCarthy will not make changes for change’s sake for a game his side is expected to win, although he admitted that substitute Alan Judge, whose cross resulted in Duffy’s goal in Denmark, would have had a chance of starting had he not later fractured his wrist.

However, he bristled at the suggestion that events in Copenhagen had served as a reminder of how tough international football is.

“I did it a long time ago, but I haven’t forgotten how every single game is a real challenge, and they are. We need to show it again in abundance tomorrow to win this game.”