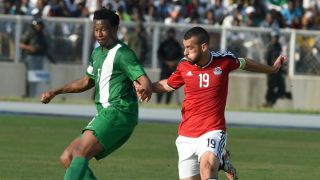 Chad's withdrawal from Africa Cup of Nations qualifying has left Nigeria facing a must-not-lose encounter at Egypt on Tuesday.

It was announced on Sunday that Chad had pulled out of qualifying with reports citing financial constraints as the reason for doing so.

Subsequently all points involving Chad have been discarded and Nigeria – without goalkeeper Carl Ikeme due to illness – are two points adrift of Egypt with two rounds of qualifying remaining.

Nigeria, who missed out on the 2015 AFCON, could have qualified as one of the best runners-up, but CAF confirmed that only the top team from Group G will qualify.

The match in Alexandria is the second between the teams in the space of five days, Mohamad Salah's late goal earning a 1-1 draw for Egypt in Kaduna on Friday.

And Nigeria captain John Obi Mikel issued a rallying cry ahead of a crucial game for the Super Eagles.

"It's a massive battle that we are going for and there should be no illusion about it," he told the Nigerian Football Federation's official website.

"We have to face reality and everyone has to give more than 100 per cent because we just have to qualify for the Cup of Nations.

"We have to go to Alexandria and fight with everything we have. There are still matches to play and we have confidence that we will earn the ticket."

Egypt's preparations for the encounter have been rocked by reports on Sunday that the nation's Football Association was dissolved by the Supreme Administrative Court amid accusations of rigged votes in its 2012 elections.

Head coach Hector Cuper must keep his side focused, though, as a win could ensure their place in Gabon.

The draw in the first encounter between the teams ended on a controversial note when full-time was blown despite Salah closing in on goal.

But the Roma winger admits he was relieved as he was unsure how a 40,000 strong crowd, packed into a 16,000 capacity at the Ahmadu Bello Stadium, would have reacted.

"I breathed a sigh of relief after the ref blew the final whistle," Salah told Al-Ahram Daily. "I was afraid when I received the ball and was heading directly towards the goal to score what could have been the winner.

"Had I been able to score, I wouldn't have been able to tell what exactly the fans' response would be, that's why I thanked God right after the final whistle."