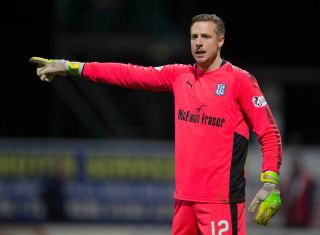 Elliott Parish has vowed to challenge Zander Clark for the St Johnstone number one spot after completing a move to Perth.

The 29-year-old goalkeeper has signed a two-year-deal having made the switch down the Tay from Dundee.

Clark has proved to be Tommy Wright’s first choice at McDiarmid Park but Parish is eyeing up that spot for himself.

He told Saints’ official website: “I think it’s going to be good for both Zander and I to be working together and hopefully it can improve us both.

“He’s in front of me and I know that but all I can do is be the best I can and be ready if an opportunity comes along. Hopefully if I do get a chance I’ll put in performances and win over the fans.

“The manager has been great and he’s been totally honest with me from the word go. He told me the role I have and that I will have to bide my time and be patient as Zander is the club’s number one.

“I really loved his honesty as it’s something that you don’t always get in football. I’m looking forward to working with him.”

“In my two seasons in Scotland so far I’ve been really impressed with the club and how well they’ve done. Hopefully I can be a part of more success in the next few years.”

Boss Wright added: “We have been looking for an experienced keeper as a back-up to Zander.

“Obviously we have our young keepers Ross Sinclair and Jack Wills but the aim is to try and put Ross back out on loan again for further experience so we needed another keeper to help the youngsters in training and put pressure on Zander.

“Elliott fits the bill. He knows the league, lives quite close by and is a good talker so I have total faith in him doing the job and look forward to working with him.”