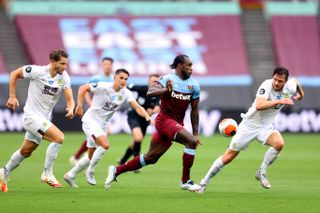 With just four rounds of matches remaining in the Premier League season, time is running out to optimise your fantasy team for the run-in.

To assist managers who are struggling for goals, we’ve analysed every player using the game’s Threat metric.

This rewards players for doing the sorts of things which lead to goals and are therefore likely to find their way onto the scoresheet when you need it most.

Of the players who have accumulated at least three matches’ worth of minutes since the season resumed, one player stands head and shoulders above the rest and his identity will not shock you.

Mohamed Salah has been generating an average Threat level of 74.5 per 90 minutes – far beyond what anyone else has managed – but if you don’t have a spare £12.5m lying around or need a more left-field signing to catch your mini-league rivals by surprise then there are plenty of alternatives.

An intriguing differential option is West Ham’s Michail Antonio, who is owned by just 1.4% of managers despite racking up the third most Threat per 90 minutes over the last five rounds of matches.

At just £6.9m and with three of his four remaining fixtures having a Fixture Difficulty Rating (FDR) of just 2, the Hammers winger could be an absolute steal.

Between those two lies another name that few would have expected to see on this list at the start of the season: Chelsea’s veteran striker Olivier Giroud.

The Frenchman has spent more time on the bench than in the goalscoring charts in recent years but has flourished after being given an extended run in the team by Frank Lampard.

With a home game against struggling Norwich on the horizon, Giroud could register at least one more big return before the season wraps up.

For managers operating on a tight budget, the acquisition of Phil Foden is a no-brainer.

Still just £5.4m, he ranks higher for Threat than any other player in Manchester City’s star-studded squad so is doing more than just making up the numbers.

Like Antonio, Foden also has three games with an FDR of 2 still to come and has established himself as a first-team regular.