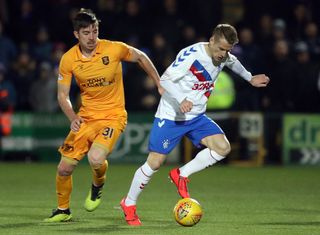 Declan Gallagher believes he is already reaping the rewards of his move to Motherwell as he prepares to face one of the men who made it possible.

The defender is set to come up against his former Livingston manager, David Hopkin, when Motherwell host Morton in the Betfred Cup on Friday.

Hopkin re-signed Gallagher for Livi after the centre-back was released from prison in January 2017 after being convicted of assault.

The pair enjoyed consecutive promotions together before Gallagher enjoyed an ever-present season in the top flight with Livi, earning a move to Motherwell with his impressive displays.

Hopkin spent some of last season as Bradford manager and got his Cappielow reign off to a flying start with a 6-1 victory over Dumbarton.

“A lot of people say he was long ball but it’s nothing to do with that, he likes playing in the opposition half and working hard and making it hard for other teams and there is nothing wrong with that.

“I’ll not look forward to seeing him if we get beat, that’s for sure, he will try and rub it in my face… but seriously, I’m definitely looking forward to seeing him, he is a good guy and a good character in our changing room. So it will be nice to have a wee chat with him.

“He signed me the second time for Livingston and gave me my chance back in football so I owe him quite a lot.

“I might not be here today if he hadn’t given me that first chance.

“I think I repaid him with us getting the League One title and getting up through the Championship play-offs. But I definitely owe him a lot.”

Gallagher believes the Fir Park set-up will help him improve.

“I think already I can see benefits to my game working with the sports scientist and the coaching and information I’m taking in every training session, it’s affecting my game and I can see the improvements.

“I’m getting certain stuff that I wasn’t getting before, getting my proteins in, better food and getting a bit more one-to-one time, things that are specific to what I need on the pitch instead of doing it collectively.”

Motherwell will be without striker Chris Long (concussion) and midfielder Casper Sloth, who has been allowed time off to deal with personal issues in Denmark. Devante Cole is also a fitness doubt.