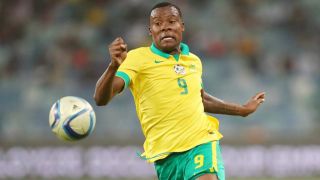 Keagan Dolly put in a man-of-the-match performance to help South Africa to a 4-0 away win over Gambia in Sunday's 2017 Africa Cup of Nations qualifier.

The Mamelodi Sundowns midfielder set up both of Thamsanqa Gabuza's goals in the opening 45 minutes, before scoring twice himself after the interval to help his side to a comfortable victory in the Group M encounter.

South Africa remain third in their pool with six points from five games, and face Mauritania - one point clear in second - on matchday six in September.

Ephraim Mashaba's men made a strong start and were unfortunate not to be awarded a free-kick on the edge of the box after Mandla Masango was brought down in a dangerous position, while Gabuza had a shot saved by Gambia goalkeeper Alagie Nyabally.

Gabuza did find the net on the half-hour mark, though, opening the scoring after some great work from Dolly.

Gabuza continued to cause the Gambia defence all kinds of trouble in the first half and the Orlando Pirates striker made it 2-0 in the 38th minute, tapping home at the near post after being picked out by Dolly.

Sibusiso Vilakazi, who had replaced the injured Thulani Serero midway through the first half, felt he should have been awarded a penalty shortly before the break, and blasted a shot over the bar soon after.

South Africa kept pushing for more after the interval and were rewarded for their attacking intentions when Dolly netted a stunning strike in the 55th minute.

The superb Dolly poured even more salt in Gambia's wounds in the 79th minute with yet another sublime goal from 25 yards out to help his team to their first win in Group M.